Back in 1944, Hollywood produced “Lady and the Monster”. Not even a decade later, they remade the film as “Donovan’s Brain”. Now, less than a decade after that, the British remade the film yet again as “The Brain”! I’ve seen the other two films and decided to see if the British version is any better. And, after seeing it, I am not sure I’d say it was better…more very different.

Dr. Corrie (Peter van Eyck) is one of those researchers whose humanity and ethics take a back seat to his research. He’s been working on trying to keep brains alive after the rest of the monkey has died and he’s longing to try his experiments out on humans. Soon, an opportunity practically drops in his lap when an airplane crashes nearby. Everyone on board is dead or dying and the one living victim is nearly dead. So, Corrie decides to try out his experiment and he ends up keeping the brain of a cruel industrialist alive.

This brain apparently is from a man with a strong will, as soon it begins controlling Corrie and makes him investigate the airplane crash. Soon, folks are alarmed that Corrie keeps declaring that it was murder and that he seemed to know details of the case he shouldn’t have known. How long until the murderer decides that Corrie is a liability and needs to be gotten out of the way?

This film, unlike the other two, is less a horror film and more a murder mystery. Van Eyck’s acting is very nice and the story held my interest. Very good and different enough from the others that it’s still worth seeing.

By the way, the prop brain they used in the film was too big…more like an elephant’s brain than a human one! 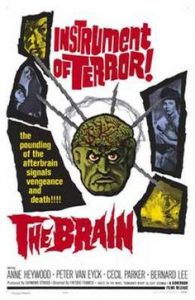