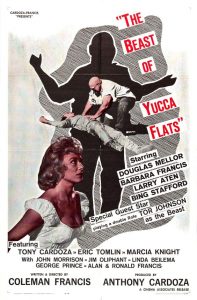 THE BEAST OF YUCCA FLATS is a classic “good bad movie.” Big Tor Johnson is a Russian scientist who is transformed into a choke-happy maniac after an A-bomb test. With two of the blandest rangers imaginable hot on his trail, the “beast” makes caveman noises, takes a nap, chases after children with a stick and, in an uncontrollable fit of rage, tosses a rock.

While Tor’s indescribable performance is enough to fill one bad movie, there are plenty of other “highlights”. For one, the film was shot as a silent, with audio (including some incredibly cheesy “suspense” music) added in post-production. The voice-overs are every bit as unconvincing as the acting. It’s impossible to watch the characters interact and not picture someone sitting in front of a microphone, indifferently reading from a script.

Secondly, the film has plot holes so big not even Tor’s supper could fill them. The opening scene, for instance, depicts someone (presumably the beast) murdering an innocent woman. But it’s prior to Johnson’s transformation, and the maniac never leaves Yucca Flats. So who did the deed? And why is it so easy for these characters to get so close to an atomic testing site? And why can’t the rangers manage to climb a summit so non-challenging that a couple of young boys have no problem? I guess it helps not to be so inquiring.

The absolute best (or worst?) part of this film is the inane “narration” by director Coleman Francis. With so much silence to fill, it often sounds like Francis is just making things up as he goes along, hoping to sound deep, sophisticated and poetic. An example: “Boys from the city, not yet caught by the whirlwind of progress, feed soda pop to the thirsty pigs.” Or: “Touch a button, things happen. A scientist becomes a beast.” But just reading such quotes don’t do them justice. They really have to be heard, in Coleman’s serious-toned voice, to be believed.

And what about the “beast”? Despite the title, Johnson isn’t much of one. He looks pretty much like the regular Tor Johnson, save for some “puffy burn” makeup. I was expecting some phony-looking rubber monster. Nor does this beast really do beastly things. He just chokes (or tries to choke) people and makes caveman noises. In the personality department, he makes Frankenstein’s monster look like Freddy Krueger.

What’s most amazing about THE BEAST OF YUCCA FLATS is that it was a big screen release. People paid money to see this, and in its day, more than a few presumably had to cover their eyes at the sheer horror. The budget was said to be around $34,000, but you’d be hard-pressed to find where even that minute amount went. It looks a group of friends just got together one weekend to have some fun with their new film recorder. Consider the rabbit who hopped onto the set toward the end of filming. Francis just went with the unscripted moment as the rabbit investigated Johnson, who at that point was supposed to be dead but is revived long enough to kiss the animal (what’s that about?) before again losing consciousness. It’s reminiscent of your family’s home videos when the camera suddenly jerks away from little Jimmy roasting marshmallows to an impromptu moment in the background: “Look! A rabbit!”

Love it or hate it, THE BEAST OF YUCCA FLATS is truly unlike anything we’ve ever seen or will see again. Though it may take more than one viewing to fully appreciate the ineptness, its ridiculousness will stay with you. Recommended for anyone whose gut hurt after PLAN 9 FROM OUTER SPACE.