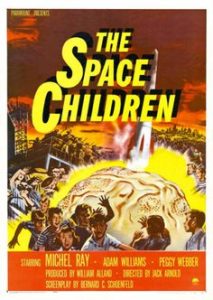 Somewhere on the California coast, midway between San Francisco and Los Angeles, a small group of scientists, engineers and technicians working in a secured base are preparing to test-launch a six-stage rocket carrying a satellite with a nuclear warhead: The Thunderer. The satellite is designed to be an immediate-response strike against enemy aggression, anywhere in the world. It is supposed that other nations are preparing similar satellites and weapons….

Unbeknownst to the powers that be, other minds have reason to want to see the project fail, and utilize an unsuspected resource to carry out their plans…

This small but effective little sci-fi tale is long on atmosphere, novel in viewpoint and execution, and well worth a couple of viewings for fans of the ’50’s sci-fi genre.

More than a few familiar cast members, and an impressive band of juvenile performers, under Jack Arnold’s sure and spare directorial hand, give this a fresh and simple feel, and don’t spend a lot of time hammering home its message (rare for the immediate post-Sputnik years).