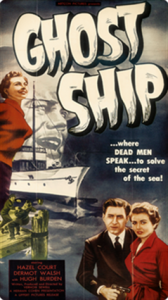 This was pretty good entry in the Val Lewton Horror Collection, even though it’s anything but “horror.” This film is a straight drama, almost a film noir about a paranoid sea captain (Richard Dix) who eliminates anyone who disagrees with his “authority,” a key word in this movie.

Russell Wade is the captain’s protégé, and the story really centers around him and the conflict he has with his boss after he begins to find out what a violent nutcase he happens to be. Along the way, it was noteworthy to see Lawrence Tierney play one of the captain’s victims.

Also good was Jacob “Sparks” Winslow as the ship’s radio operator. This is an involving film as we root for Wade to expose this captain and to convince others that the man with the “authority” is an evil person.