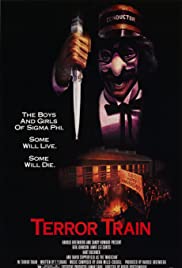 The college students Doc (Hart Bochner), Michelle “Mitchy” (Sandee Currie), Mo (Timothy Webber), Alana (Jamie Lee Curtis), Edward “Ed” (Howard Busgang) and Jackson (Anthony Sherwood) plot a prank for their college mate Kenny Hampson (Derek McKinnon); however the joke goes wrong and Kenny ends up in a mental institution. Years later, Doc and Mo decide to celebrate their graduation with a costume party and a magician (David Copperfield) aboard of a train. In the embarkation platform, Ed is murdered by a killer that wears his costume of Groucho Marx. Then he kills Jackson and wears his costume of The Swamp Thing. The conductor Carne (Ben Johnson) discovers his body, but who might be the masked killer?

“Terror Train” is an average slasher, with a claustrophobic story developed in a moving train. The identity of the killer is discovered but the he and his victims wear costumes and is difficult to identify who might be him.