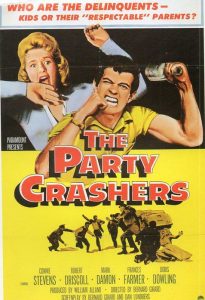 Twig Webster (Mark Damon) and his gang of hoods show up at a nice party and soon end up trashing the place. They are uncouth jerks…and now Barbara Nickerson (Connie Stevens) is practically panting with obvious desire at this bad-boy, Twig. Through the course of the rest of the film, she keeps playing Twig and her boyfriend, Josh (Bobby Discol) against each other and you KNOW that sooner or later all this has to end in some sort of tragedy.

The film not only focuses on these three young people but their parents in order to give you an idea of their home lives and how this molded them into who they are. The most interesting is Twig’s, where his dad is a drunk who is slapped around by his wife and she runs around on him constantly.

So is all this any good? Well, if you are looking for a sensationalistic exploitation film, this really isn’t it. In other words, it’s not cheap exploitation crap like so many ‘youth run wild’ films of the era. This one is trying to say a bit more and isn’t as seedy…and the acting and production values are a bit better as well. Now I am not saying this is some must-see film…it’s not. But it is reasonably entertaining and reasonably well made.

By the way, there are a couple interesting things about the film. Bobby Driscol was a very prolific and talented child actor…and this is his final film. Drinking, drugs and death all came at age 31! Also, his father in the film is played by Denver Pyle and it’s interesting to hear him speaking without that strong southern drawl you usually associate with him.