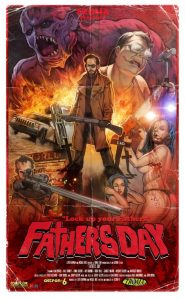 It’s hard to mention “Father’s Day” without talking about the controversy surrounding it. It all started in 2010, when it was announced that Troma was going to help finance a movie based on a mock trailer made by a Canadian collective known as Astron 6. The movie eventually got released in festivals and midnight screenings-and when it came time for a DVD/Blu-Ray release, word got out that there were problems between the two. Apparently, Lloyd was selling bootleg copies of the movie, and that the Astron 6 logo was not included on the poster. I don’t know if this is true, but if it is, then that really sucks. Especially when the end result is probably my favorite Troma movie, and is the best thing they’ve done in forever (I’m not a “Citizen Toxie”, “Terror Firmer” or “Poultrygeist” fan to be honest.)

The story is one we all know well: As a kid, Ahab saw his father become raped and murdered by serial killer Chris Fuchman (Mackenzie Murdoch), who has a thing for dads. Years later, the spree continues, and Father John Sullivan (Matthew Kennedy) and a gay street hustler named Twink (Conner Sweeney) want a now adult Ahab (Adam Brooks) to stop this father rapist once and for all. However, things are going to be hard, as Fuchman also has his eyes set on Ahab’s sister Chelsea (Amy Groening.) To make matter worse, it turns out that this killer isn’t all he seems to be.

First things first: This is not a movie for the squeamish. There’s multiple scenes of male rape, tons of male nudity (some of it comical, though there’s also plenty of female nudity to go with it), graphic gore and even genital mutilation. In spite of all that, this is actually a comedy that serves as both a homage and a satire of exploitation films. Think what would happen if a Canadian sketch comedy troupe like The Kids in the Hall did a horror/comedy, and you might be close. Thankfully, it’s also frequently funny, with at least 98% of the jokes hitting their target. Next to “Black Dynamite”, this is the funniest Neo-Grindhouse movie I’ve seen. Plus, it has the best Lloyd Kaufman cameo ever, as he shows up as both God and Satan.

On top of that, it’s also very well made. The direction is top notch throughout, and actually manages to do what most micro-budget (this cost $10,000) movies can’t do and makes it look at least 10 times it’s budget. The acting is also good, with everyone hitting the right tone and managing to make their characters interesting (Twink is my favorite. Dude’s hilarious.) Add a dead on score, great make-up and gore effects, great one liners and tons of enthusiasm and literal blood, sweat and tears to make it, and you have yourself a winner.

“Father’s Day” will not be for everyone. Those who are easily grossed out or offended (hell, even those of hardened sensibilities will find themselves cringing) will most likely avoid it. For me though, this is one of the best exploitation tributes I’ve ever seen, and is a must for fans of Troma or warped comedy in general.