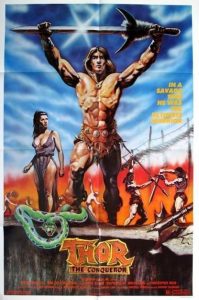 As far as Sword+Sandal flicks go, “Thor the Conqueror” is one of the more ‘realistic’ movies of the genre. Instead of being pretty, and polished, with elaborate sets and over-styled hair, we get a surprisingly gritty and rough movie, shot totally in some forest, with a very minimalist style. And this is what gives “Thor the Conqueror” a believable edge. Actor Bruno Minniti likewise, is not some huge, steroid ripped pretty guy with perfect hair, but rather a more authentic looking hero. With his slimmer, but ripped build, Thor comes across as a lean and mean fighter, a lot more agile than some huge guy. And rather than make Thor a stereotypical “hero” beyond reproach, he is shown to be rather rough with females, raping, and sometimes killing them with little thought, and no regret. I thought this was a brilliant touch, as who ever imagines a figure like ‘Thor’ to be a well-behaved gentleman has absolutely no understanding of the Norse Legends. Barbarians, Vikings, were pillagers, rapists, and murderers. They were warriors, and rarely noble. Other people criticized his portrayal, saying that they couldn’t sympathize with him. I find that statement very silly.

There was a brilliant Scandinavian director named Hrafn Gunnlaugsson, who created some very realistic Viking films in the 80’s. i’m not saying “Thor the Conqueror” is quite in that league, but this strange film reminds me of those movies in the way it is shot in such minimalist style, with crude sets and costumes, and muted colors. On a side note, I was not expecting any romantic content in this movie, but i found the relationship between Thor and Ina to be really nice. As brutal as Thor is with her in the beginning, she finds that she cannot abandon him when his life is threatened by a group of cannibals. she risks her life to rescue him, and from that moment on, the hero of the story develops a new kind of respect and understanding for the opposite sex. I’m surprised at how much I enjoyed this obscure, low budget movie..I recommend it to fantasy film lovers who don’t need big budget sets and special FX to enjoy a good fantasy tale..