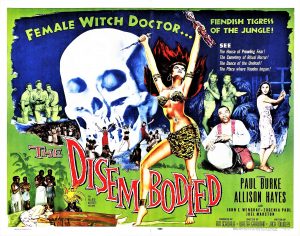 Three men making a movie in the jungle rush to the nearest village after one of them is attacked by a lion. The local doctor does what he can for the injured man, but his beautiful and nefarious wife(played by Allison Hayes) has designs on the men, since she is also the local voodoo high priestess, who uses her powers to torment her husband(whom she hates) and seduce the men. They find it difficult to resist, though feel guilty and refuse to murder him, leading to a revenge showdown. Though a paltry production, with a paper-thin story and poor writing, it is the sultry Allison Hayes who gives the film the camp value it does possess, though that’s all.