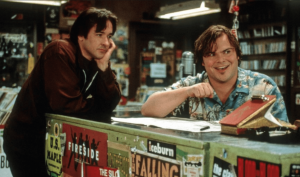 I don’t know about you but things are really strange out there. I thought with the approval of “Save Our Stages”, and the decision to re-open theaters in New York people would grit their teeth and start to look at strategies for re-opening. But that’s not really happening. I have to tell you the closings are coming hard and fast. The collapse of the Cinemagic chain in New England and the continued pattern of closing theaters, including today a Cinemark in downtown Evanston, Illinois. The Cinema Theater, Rochester’s oldest theater, decided to shutter its doors last week.

“The Croods” has been playing since November and this week was the number one picture again, bringing in a whopping 1.7 million in total box office. As an aside, I can buy this movie on DVD/Blu-Ray and streaming. There is a lack of product, a deep lack of product. The movies that are being released are not running with any kind of substantive advertising campaign. The numbers are not good.

A bit of good news, the new Paramount Streaming service, Paramount Plus, a new streaming service replacing the struggling CBS All Access, will stream a sampling of movies from Paramount Pictures 35 to 45 days after they land in theaters beginning next week, while other Paramount movies will hit the online service 90 days after they land in cinemas. This is good news because the windowing being proposed by Paramount seems to acknowledge the need for a proper window in order to relaunch the movies.

A Quiet Place Part II and Mission: Impossible 7 will both land on Paramount Plus to stream 45 days after they first hit theaters; that allows the Quiet Place sequel available to stream on Nov. 1 and Mission: Impossible 7 to begin streaming on Jan. 3. Other big-budget movies, like Top Gun: Maverick, will arrive on Paramount Plus in 2022. Paramount Plus will release new movies from MGM Studios, several months after they are released in theaters. This is very good news. It may be an indication that the studios really are seeing that a proper cinematic ecosystem is a necessity.

When I was much younger there were record stores. Every Saturday people would invade these stores, hold record albums in their hands, read the liner notes on the back of the album and decide whether or not to buy them. There was a slowness about this, people would linger over the album art, almost savor the look and presentation of the album. I recall going to five records stores one Saturday looking for a copy of “George Thorogood and The Delaware Destroyers” fifth studio album “Bad To The Bone”. I liked record stores, I liked the smell, the feel of the albums and I loved the people watching.

CD’s came onto the scene and well that was just not enough fun. CD’s could easily be pirated since they were digital and soon the records stores started to fade away. They faded away because the industry had shifted the experience. Itunes, Spotify and Pandora came into being and CD sales started to decline rapidly. 8-tracks took a hard but short-lived run at the dominance of 12 inch vinyl records and cassettes fell as compact discs took the world by storm, and through it all, the music industry saw its revenue continue to climb. That is, until it was digitally disrupted.

In 1995 the music business represented 21.5 billion worth of revenue, in 2015 it had sunk to a low of 6.8 billion. As a result of COVID, the music industry will see a 28% reduction in global revenue due to the restrictions of live performance. Last year, 2020, marks the first year in more than a generation since record sales have surpassed CD sales. There are a couple of reasons for this: CD sales have dropped dramatically in recent years, while sales of vinyl records are actually up this year. And while you might think it’s nostalgic Boomers or Gen Xers behind the rise of album sales records, in fact surveys show it’s millennial consumers driving the rising trend in vinyl sales. They like to as in all things are seek things that once were and are hungry for it.

There is a crisis in moviegoing Day in date releasing patterns are going to erode the box office deeply. There are portions of the audience, no matter what anyone says that are not coming back. I believe that 50% of the pre COVID audience are going to be exceedingly reticent about coming back to a theater.

Economically, the developed world is going to have to enter a period of reset due to COVID. This is a new world where social distancing has given rise to a realization that maybe the billions of dollars spent on office rents are a giant waste of money and maybe, just maybe working from home might save companies large amounts of money on their bottom line. In Manhattan we are seeing the rapid decline of retail rents sometimes by up to a 50% reduction. Nike is moving away from retail and going full on to a virtual presence. We are starting to see, due to COVID, real supply chain issues which is primarily due to in some sectors having a reluctance to move to the virtual and the shifting of the role of labor.

The economy of North America has been severely altered. In many ways China has managed to take the calamity of COVID and utilize it for economic dominance. It has emerged as a global cinema leader, who after a brief flirtation with Hollywood, took the lessons learned and made its own homegrown cinematic economy stronger. Hollywood now is finding it harder to access this market.

The rapid dance to streaming, I believe in the long term, will be a real misstep for Hollywood. Due to the rise of the virtual economy and the basic human need for community after being cocooned in their homes as a result of the movement towards home offices will be seeking escape. I feel that within this lies an opportunity for theaters to really reinvent themselves. I think though that the day and date releasing pattern is going to prove problematic since there is a good chance people will reject this form of commodity-based movie viewing in favor of community-based movie viewing. People need community and if the theaters start diversifying their offers, start moving away from Hollywood they might be able to meet the demand as the sleepy masses rise from their cocoons.

Vinyl LP’s are back and they are back because there is something unique, something cool and something authentic about vinyl. I believe strongly that moviegoing will be back, and back with a vengeance as long as we as a business can discard a reliance on Hollywood and move to the authentic. I think that if we offer a diverse and truthful offering, in the end moviegoing will be fine.

One of the best pieces of advice my father gave me when I was about to become a dad was “that the only thing you can really give your child is your genuine self”. I believe what we owe our audiences is a genuine movie going experience.

Mark my words, the drive-ins, the most authentic as well as genuine moviegoing experience, will lead this resurgence. Any theater chain which is not doing a deep dive in regards to deploying drive-ins is making a big mistake. The audience will find you if you offer diverse and engaging movies.