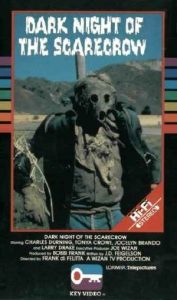 Frank DeFelitta, who also happened to write the novel Audrey Rose, turned to directing for this 1981 horror fantasy. The film opens with an eerie credit roll set on a pastel-colored windmill backdrop, and this is when we first hear the film’s unforgettabley chilling score. Twenty years after seeing this film for the first time, I can still play it over in my head. The film soon progresses to its undeniably clever storyline, which I won’t bother describing in detail as that has been done for me by previous reviewers. The atmosphere of this film is almost unbearably suspenseful at times, and the fact that we never see even a far-off image of the murderous culprit during the film adds to the creepiness. Charles Durning gives one of his best performances as the selfish, provincial mailman who is stalked by a vengeful killer. This film is best viewed alone late at night!