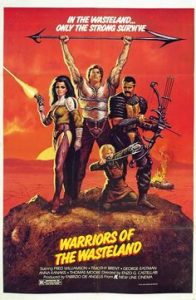 The cover of this little stinker has a bunch of punkers (none of which are in the film) so i went into it expecting a punk rock style exploitation flick from the late 80’s and instead discovered the funniest ROAD WARRIOR rip off ever! It’s one of the tons of Italian knock offs of the early 80’s so you know it’s gonna be cheesy but this one is just ridiculous! Ultra cheap with plenty of action/violence and enough funny gore to satisfy any fan of 80s b-rated sleaze. Not to mention a ridiculous soundtrack! The only thing that’s missing is some boobies. Not that there’s no sex just not anything arousing in any way. Of course it takes place in the post apocalyptic future where a gang of ridiculously costumed barbarian types called the Templars set out to destroy the few humans left as punishment for the crime of being born. Cool enough plot for me! Basically this movie is pure shite but it’s funny as hell especially when watched with chicks or people who are not fans of crappy movies. Trust me, seeing the expression on their face during the Templars initiation sense will make hunting this baby down well worth the hunt!