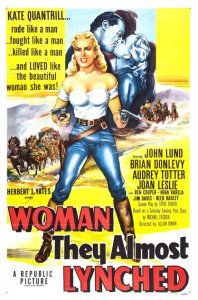 One of those unusual westerns with two women as the central characters… such as in “Johnny Guitar” and “Jubilee Trail,” among others. During the Civil War in a town run by ruthless people, bad Kate has it in for darling Sally but stay tuned to the climactic ending to see how this all works out. Definitely a cheap oater with few production values, but it does have lively performances from Joan Leslie and Audrey Totter. If you know these actresses, then you know who plays whom. Fourth-billed Leslie is actually the star of this dopey-titled film and is always a joy to watch. For those who love women fight scenes, this has one of the fun ones.