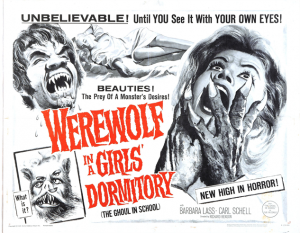 This is, as you might expect, a movie about a werewolf in a girl’s dormitory (although technically the werewolf mostly hangs around in a forest outside the girl’s dormitory). The “girls” actually look to be about twenty-five on average and resemble European fashion models of the era much more than the “delinquents” they’re supposed to be. And this was made in 1962 so you’re not going to get any nighties or plaid mini-skirts, let alone any nude shower scenes. Still this is an entertaining little movie that serves to show the potential “beast” that lurks within the heart of all respectable men when they get around nubile young women. The first murder especially, while tame by today’s standards, was no doubt quite a taboo-breaker at the time. The werewolf attacks his victim “missionary style” and the screams and cries that she makes as he ravages her off-screen could easily be taken for something else entirely. The other murders and attacks are less lurid, but generally pretty effective.

The movie also provides a plethora of great suspects and red herrings including a new professor who left his old job after a mysterious scandal, a benefactor of the school who is paying various girls for sexual favors (and finds himself being blackmailed), the creepy and very bestial-looking groundskeeper, and the very refined headmaster who nevertheless bears a striking resemblance to the werewolf. The movie really keeps you guessing to the end.

It’s in black-and-white, of course, and it’s dubbed (although the European cast does seem to be speaking English most of the time). Not a great movie perhaps, but not a bad way to waste 80 minutes either.