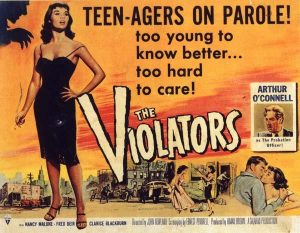 “The Violators” is a very frustrating film to watch. One one hand, the basic idea of Arthur O’Connell’s character is excellent…and O’Connell is wonderful. It also has a nice message about a man who has faith in people. But on the other, the film’s message is muddled, the part written for the daughter is poorly written and the film has a cheap made for TV look. On balance, I’d say the bad easily outweighs the bad.

After getting his law degree, Solomon (O’Connell) has a hard time getting work. Again and again, folks say they want an experiences lawyer…but how can you get experience unless someone gives you work? In desperation, he gets a job with the juvenile probation department and he is, at first, disliked because he is a ‘bleeding heart’. But he genuinely cares about the kids and wants to do the right thing and he makes a name for himself as an advocate for kid’s needing a second chance. This first portion of the film is excellent.

By the way, the posters for “The Violators” make it look like a sleazy exploitation film…which it isn’t in any way. Odd the way they advertised this film.

In the second portion, however, the story starts to fall apart. Sol’s daughter is an idiot who is dating a buy who turns out to be a thief…no other way to say it. But she defends his horrible behavior and is angry that her father, rightly, is concerned about this boyfriend. What’s next? Well, at this point, who really cares?? All I know is that both halves of the film look as if they were written by different people who never talked to each other nor saw each other’s scripts. Yes, it’s that disappointing.