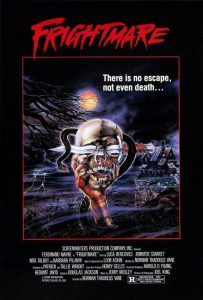 Frightmare obviously will never win an academy award, but it is something that most low-cost horror movies aren’t–scary. The star, an aging horror film actor, gets posthumous revenge on those who decide to kidnap his corpse. The sequences of their murders are suspenseful and chilling as they get picked off one by one. The easiest death is by gas chamber and the worst is by live cremation. For those who like mindless entertainment, tey may not like this movie. But for those who like movies about retribution getting served for a bunch of grave robbers, this would be up their alley. Though not the best horror film ever made, but it certainly isn’t the worst either. It’s worth the 99 cent rental fee.