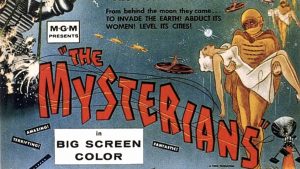 There’s something endearing about this movie. The plot is good, casting is good (with so many pretty faces, no wonder the Mystery guys wanted to come to earth), and even the score (by Akira Ifukube) remains in your head long after you see the movie. But above all there’s a special atmosphere about this movie that won’t let you forget it any time soon.

Mogera (Of Godzilla vs Space Godzilla fame almost 40 years later) makes its debut in this movie, and it started its career as weapon of the aliens not a giant UN transformer robot.

Once the fact that the Mysterians showed themselves, earth defense force ( thus the movie’s Japanese title Chikyu Boeigun ) musters up all its plans for super weapons and goes on the offensive against the Mysterians (who’ve shacked up in Japan even before they got official permission from them ).

If military technology can catch up with the aliens so quickly as in this movie, we won’t have any problems. In reality from what I understand, we’re not even near parity.

Special effects are good, and weapons looks cool (Designed by famous Japanese sci-fi artist Shigeru Komatsuzaki. They have kind of a retro look which still works today) which all adds up to make this movie one of Toho’s best.