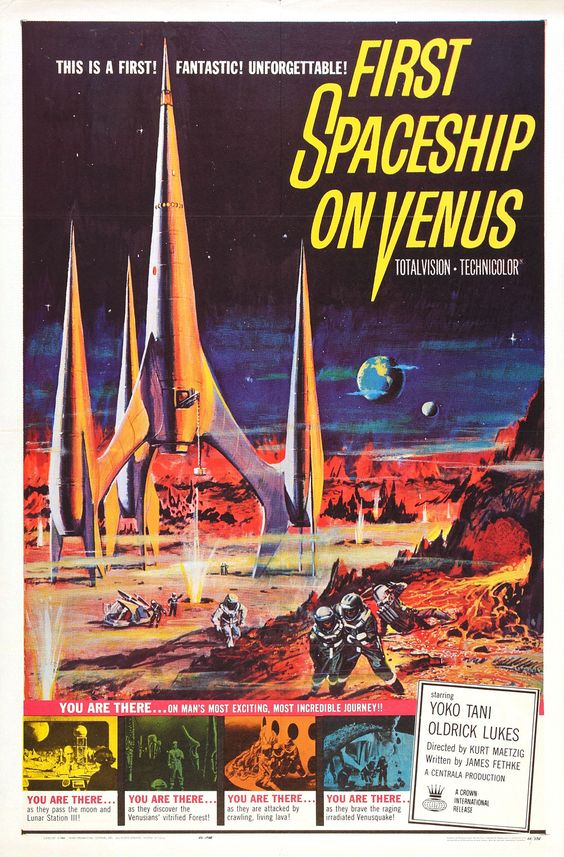 An artifact from the planet Venus is found buried on Earth, and scientists learn that the object is the log of an alien spacecraft which crashed. After attempts to contact the Venusian civilization are unsuccessful, a multi-national (and multi-racial) flight to Earth’s sister planet is launched.

When the expedition arrives on Venus they find a dead world whose civilization has been destroyed by some kind catastrophe. The story contains good ideas, but the plot seems to race along with no regard for dramatic timing or narrative clarity, undoubtedly because of the thirty minutes of footage which were removed from the American version. The obvious dubbing is a major distraction, and the sound effects are garish and unappealing. For some reason, there are very few shots of the rocket traveling through space during the voyage. Generally speaking, the special effects run hot and cold.

The spaceship itself, however, is a beauty (both the interior and exterior), rivaling the best rockets for the 1950s. The little robot is memorable and well designed (it looks like a miniature tank).

The exterior shots of the strange Venusian surface are imaginative, with superimposed wisps of vapor constantly drifting past. Listen for several segments of music borrowed from “Destination Moon” and “This Island Earth”.

0 161
Announcing The B Movie Summit