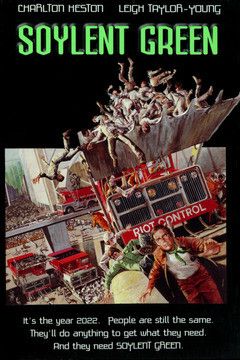 It is the year 2022 and nothing has changed even if things have gotten worse. New York City has become even more overpopulated and is just yet another city heaving in its own filth with countless “have-nots” fighting over sparse resources. Energy supplies are low, water is strictly controlled, living spaces are small and cramped and “real” food is a luxury reserved for the very rich. The masses do not have such luxuries and eat rationed supplies of high-nutrient processed foods from the Soylent Corporation. Detective Thorn is a “have-not” and just like everyone else is out to get what he can for himself and friend Sol Roth. Called to a burglary that became a murder, Thorn learns that the victim is a director at Soylent and suspects that all the curious thing about the crimes may be coming together to be far more than the work of some random thug.

Famous for its “shock” ending (which everyone must know and most people will guess) this film is actually more than just one scene and is actually an intelligent sci-fi detective story that has an engaging central story and a generally interesting vision of the future that is much more convincing than the one of Hollywood blockbusters and such. The investigation is solid but it is the world it happens within that is most interesting as we see a world where, surprise surprise, the poor people are left to make do while those better off can still enjoy the finer things while they remain. It is not an earth shattering view of the future but it is a convincing one and I enjoyed being in this story and seeing this world played out. Personally I bought it but it may help that I mistrust corporations anyway and believe that the poor will be the first to get shafted when anything bad happens, simply because they have less to work with.

The narrative is not the strongest though and in terms of it being a detective story it could have been better. Some viewers have complained about the lack of action, which I think is a pretty unfair accusation since it wasn’t trying to be that type of film. The main characters are interesting. Thorn is a man of authority but he is just like everyone else, out to get what he can and takes advantage of others the first chance he gets. His relationship with Roth is not fully explained but it worked anyway and provided a touch of humanity. It helps that both actors did good jobs of it as well. Heston normally plays the gruff hero but here at least he allows the corruption within man’s heart to come out. Robinson has less of a character but his performance is assured and is touching for reasons internal and external to the film. Support is not so good but it is less important in the smaller roles; Cotton is a nice find though.