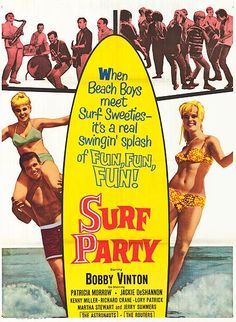 With the success of American-International’s “Beach Party” movie series, it was inevitable that other studios would try to cash in on that success. Some efforts were made by major studios, while other efforts were made by independents, “Surf Party” being one of these independent efforts (though it was picked up by a major studio for distribution.) It’s interesting to compare this movie to the “Beach Party” movies. It’s done on a much lower budget, for one thing, filmed in black and white instead of color. The song number are less polished for the most part as well. But the biggest difference is that this movie’s tone is much more serious than what was found in the “Beach Party” movies; even the ending isn’t all that upbeat. I can only imagine what youths in 1964 thought of the somewhat downer tone. Probably they would also object to a storyline that quite often feels like it was being made up as filming went along. The atypical scripting does give the movie some interest, but I would only recommend the movie to those researching beach movies of the 1960s as an odd example of the genre.