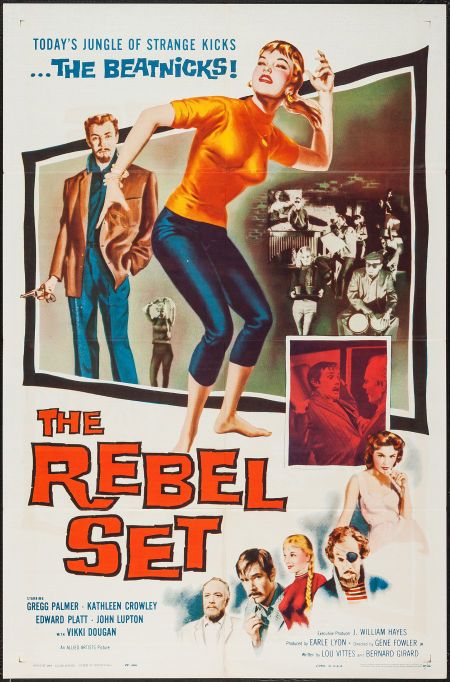 Karl Struss did the excellent photography on this film. The dark shadows and low angles add quite a bit of tension to the situation. I love the way the dark forces of greed take hold of three goof-ball beatniks(Sullivan, Lupton, and Palmer) who can’t pay their coffee house bill. Anyone who has studied Faust would recognize Tucker (Ed Platt) as a Dr. Faustus-like character, and Sydney(Ned Glass) as his assistant like Mephistoles. They convince the three beatniks to sell their souls for $200,000 each if they participate in an armored car robbery. The bold physical chase scene at the railroad tracks and the stunt work involved was really top notch. It really grabs me every time I see Johnny try to confess his part in the robbery to the detective, but the gumshoe really thinks he did the murder, so he takes a chair, breaks a train window and leaps out. It’s possible this mimicked “Rebel” James Dean’s movie, East of Eden, where virtuous Aaron (Richard Davalos) is so heartbroken and drunk on a troop train that he breaks through the window with his head, while Cal (Dean), Abra and her father watch, horrified. Dean was dead three years when Rebel Set was filmed.