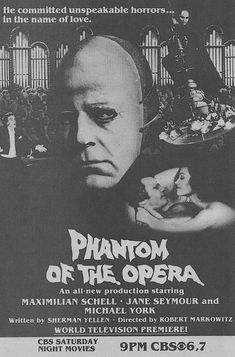 This TV film of the novel by Gaston Leroux won’t win any awards but it’s still worth seeing. Maximillan Schell is good but he tends to ham it up a little, especially when he becomes the Phantom. The makeup job is pretty scary. I shalln’t divulge any details but it’s worth waiting for. A number of changes to the original story: the setting being that of Budapest instead of Paris; the Phantom being married before fate intervenes and the title role being about as unsympathetic as can be. The scale of the production is actually quite small. There aren’t many expansive camera shots on location and the sets look a bit cramped (apart from the ones for the Opera house and the Phantom’s lair). I am not a fan of either Jane Seymour or Michael York, they bloody well irritate me! The former comes across as aloof and arrogant. The latter seems boorish and rigid. I can’t understand why Seymour was cast in two roles which are practically identical. There is nothing in the way of differentiating between the two. Jeremy Kemp is effective as the sleazy, devious Opera house manager. A great performance. The climax isn’t too bad, if somewhat depressing. This version isn’t in the same league of greatness as the 1925 film.