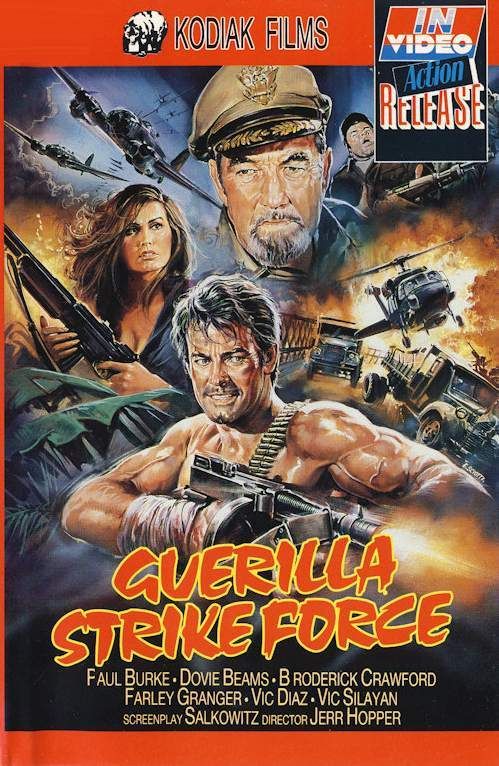 Now to the movie and the “plot”: It begins with a scene reminiscent of the start-sequence in “Saving Private Ryan”, just without the same pace, good acting, nice effects, or a general point. It’s basically just some Japanese guys invading a bunch of American guys trenched up at some beach (which we later find out is supposedly Manila Bay), shooting at random with lots of unexplained explosions and a little redundant dialogue.

Then the Americans have been captivated, and one of them escapes very cleverly (when another prisoner tries to escape and gets shot, everybody looks the other way, and our hero just rolls to the side under a house). This smooth fellow is Bob Reynolds (or actually Goodwin, depending on if you believe the movie or the cover), who later joins up with a bunch of rebel Phillipinos, and rescues a girl from being raped. The girl, Isabella, immediately falls in love with Bob, but since the country is at war, they have to fight off the evil Japanese in almost every scene.

Most scenes consists of the rebels ambushing stupid Japanese soldiers and mercilessly killing them all, or the evil Japanese commander either torturing hostages or executing innocent civilians. These two scenarios continue right up until the abrupt ending where we discover that everything that has happened in the movie didn’t matter one bit, as the entire plot actually was about Bob and Isabella loving each other without knowing it for real. Duh! Among the great things to look for in this movie are: Archive Submarine Footage, A bunch of Filipinos singing a touching native anthem in English (without moving their lips of course), and Isabella’s perfect make-up with red lipstick and all, even though she’s a guerrilla warrior just like everybody else, yielding heavy machine-guns and everything.

So all in all, as jungle-war-movies go, this is by far one of the most dull and stupid movies I have ever seen. Usually I love these cheesy movies, but this one was just repeating itself, and the ending was actually so down-played that it became a highlight. By the way, if you’re a fan of Broderick Crawford, then beware, he’s only in the movie for one scene as a general, who decides the fate or several hostages. Quite a good part, but very short.

4/10, because upon second viewing it was actually a quite decent movie, that could’ve benefited from a bigger budget and better script.