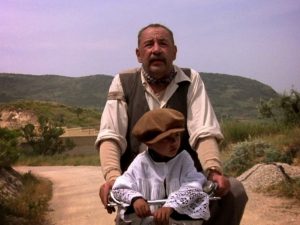 On Fridays, before I write my essay I usually scan the news about exhibition, and then, of course, I call Buck Kolkmeyer. “So what do ya think” is usually how the conversation leads off and then Buck expounds on what he perceives are the issues of the day. Buck and I are pals, and I treasure his perspective. He is also highly entertaining. Once in an awhile he verbalizes an emotion so perfectly that I have taken to having them embroidered on throw pillows and sent it to him. I imagine one day his long-suffering wife will open a closet in his office and be deluged by a torrent of Buck’s sometimes salty emotive.

One of the things that always hits me is that exhibition should be about people and relationships. Often it is not. It should be about the people who professionally interact with your customer base. Buck’s dad, Al, was a giant in the business. While working for the studios he also made sure that exhibitors got the pictures they needed to be successful. At one time Al Kolkmeyer was one of the Kings on Film Row in Pittsburgh. People trusted Al and Al Kolkmeyer always took care of his people. People remember Al for his commitment to his business and be known that his business was his customer. If the theaters he serviced made money, his studio made money.

The example that Al Kolkmeyer provided is that business when it ran well and was fluid. It solely was dependent on a proactive and reciprocal relationship with the people who were in the business of the exhibition. In November 1962 Al was named “Man of The Week” by the President of Universal, Milton Rackmil for being the Nation’s leading Branch Manager.

This used to be a business about relationships and people. I know when I used to book retro titles I would phone someone to get the picture I wanted. Usually, I would banter back and forth with the booker on the other end of the phone and a bond was formed. No more. My wife who did all the payments when I ran theaters had in-depth conversations with our bookers. She kept a solid set of books and she always respected the ladies at our Cincinnati-based bookers.

People forget that all businesses are about human relationships. I truly believe that the millions we spend on marketing could be saved if we focused more on the people aspect of our businesses. I remember the day when theater managers knew their customers. Being greeted at the door by someone who knows you develop habits and engagement that can build the base of a theater audience.

We have a deep problem within our society, a problem in all aspects of our society. The focus has become self and not other people. That is corroding our society and corroding this business.

The cult of self dominates our society’s cultural landscape. Unfortunately, this cult has within it the classic traits of psychopaths, they are oozing with shallow charm, inflated perception of oneself, and greatly inflated self-importance. This is coupled with egos with a deep need for constant stimulation, a comfort for lying, prone to deception, and manipulation, and the inability to feel empathy or guilt. This is, of course, the ethic, this self-involved mantra is reinforced by Wall Street. It is the ethic of unfettered self-service. Society has taken hold of the exceedingly misguided belief that personal style and personal advancement coupled with a headlong search for some kind of reflective individualism, are the same as the foundation of democratic equality. In fact, today personhood is often defined by the things we buy or consume, this shallowness is thrown out as supposed compensation for our loss of a democratic community. Though on the right, they believe in a Gospel based on materialism or on the left a descent into corrosive self-righteousness. In the end, it is an unhealthy pursuit to get whatever we desire. We can do anything to get what we want, even belittle and tear down those around us, including our friends and family, to make money, to be supposedly happy, and to have fame. Once mountains of fame and wealth are achieved, these thin goals become their own justification, the pursuit for self has become their own morality, their own religion. How one gets there is irrelevant, and once you do obtain wealth and fame you become an idol, a false one but an idol.

I run a business and I had a group of people from the business of exhibition approach me to have some work done. I knew that they had little or no money and they continually told me how many financial sacrifices they had made. I felt sorry for this group so I made them a deal. I will do what you ask me to do and in return, just give me a sponsorship with my company’s name on it. We did the work, which took maybe three hours. When the time came and this group advanced their first event there was no banner, no sponsorship….nothing that was promised. I could have been upset, demanded restitution but I felt that I was given a gift, I now knew the true nature of this group and their leader. I had gotten off easy by just losing five hours of billable time. I didn’t have to deal with these people again. They were only interested in what they could get now and not developing a long-term relationship. That group failed in building their community and it laid out the seeds for a troubled future.

Our society is infected with ‘Boosterism’ constantly inflating someone’s abilities and qualities in ways that have no foundation in reality. ‘You’re gorgeous!’ ‘You’re a star!’. I sometimes produce low budget movies, I had one actor I worked with constantly try to line up auditions for friends espousing how good looking or how talented this burgeoning Katherine Hepburn/Robert Redford was, only to find out that she was only in one play in elementary school and played the second cabbage and she looked like Charles De Gaulle after a bender. My actor friend always needed to convince himself that this person actually had these qualities when they did not. This kind of thinking is dangerous, it creates a single preoccupation with ourselves and shifts personal motivation around maintaining self-importance.

Personally, I take much solace knowing that I am not very important and frankly I like it that way. I think I am a failure if I set myself up as an absolute anything, and success if I put myself out as someone seeking answers to so many questions. You see, in our world there really are no absolutes.

Our society is on one big ego trip. In many ways, it is my wish that this pandemic of ours has given the world a smack in the puss and reminds us that the only way in life is to be community-centric. In the world of exhibition, we have promoted detachment by engorged and distant seating. We are met at the door by a disinterested teenager whose eyes are firmly fixed on the clock in the lobby. Engage your customer, become part of the experience. Every person working your theater should be a showman and to be a showman you must know your community.

We need to focus solely on the humans in our business, engage them as equals and as valued guests and you will find that your world will change; business will be more profitable and a much happier place. Instead of going and listing a series of more than insipid questions in your employee’s handbook, just suggest that your team engage in sincere, compassionate conversation with each other and your customers.

This recently passed month of June marks an anniversary, an auspicious one in my estimation. On the evening of June 6, 1933, motorists crowded into a nondescript parking lot on Crescent Boulevard in Camden, New Jersey for the first-ever drive-in movie screening. In the beginning, the term “drive-in” wasn’t used. Instead, Richard Hollingshead, that genius who developed the idea of what we now know as the drive-in called his invention “park-in theaters.” The first iterations were as ramshackle as you could imagine. Hollingshead mounted a 1928 Kodak projector on the hood of his car, tied a screen onto some unsuspecting trees, and put a radio behind the screen for sound.

“My invention relates to a new and useful outdoor theater and it relates more particularly to a novel construction in outdoor theaters whereby the transportation facilities to and from the theater are made to constitute an element of the seating facilities of the theater,” the patent reads, “…wherein the performance, such as a motion picture show or the like, may be seen and heard from a series of automobiles so arranged in relation to the stage or screen, that the successive cars behind each other will not obstruct the view.”

For a long time, I have held the opinion that the future of movie-going lies with the drive-in. I believe that within the drive-in lies the ability to re-invent community-based cinema. Hopefully re-engaging within a drive-in environment will lay the foundation for community engagement on an industry-wide basis. Right now I am trying to see what I can do to provoke Buck, I have not ordered a throw pillow for a while.