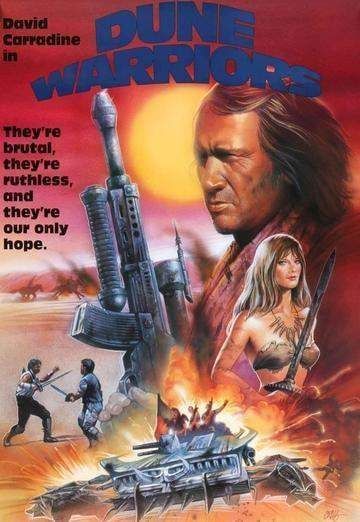 In another of his numerous 80s / 90s B movie assignments, David Carradine plays Michael, a lone wolf in a post-nuke desert. One day, he encounters a young woman (Jillian McWhirter, “After Midnight”) who hopes to hire some warriors to defend her community of “Chinle”. The main bad guy is a warlord named William (veteran movie bad guy Luke Askew, “Rolling Thunder”), and Michael’s been yearning to destroy William for vengeances’ sake.

The script (by Thomas McKelvey Cleaver) and direction (by Filipino exploitation icon Cirio H. Santiago) are very routine, but “Dune Warriors” is still sufficient entertainment for undemanding viewers. One has to respect any movie that dispenses with exposition regarding the current state of planet Earth and dives head first into the action right away. Here, we’re treated to a plethora of explosions, nasty gunshot wounds, and a couple of good fire gags. Basically, “Dune Warriors” is an “action for its own sake” type of deal. But giving the story some interest is the fact that it’s yet another variation on the old “Seven Samurai” formula (except that the number of warriors assembled here is five, not seven).

Carradine is okay – no more, no less – as he and the always solid Askew, his nemesis from the fantasy flick “The Warrior and the Sorceress”, face off. The supporting cast is fun: Rick Hill (“Deathstalker”) as Carradine’s sidekick, Blake Boyd (“First Kid”) as the handsome Dorian who takes a fancy to McWhirters’ character Val, Joseph Zucchero (“Naked Vengeance”) as the cowardly Reynaldo, Henry Strzalkowski (“Equalizer 2000”) as Vals’ weaselly fiancee, and especially the enticing Maria Isabel Lopez (“Kinatay”) as warrior woman Miranda.

A collective dubbed “The Score Warriors” did the music, and it’s pretty good; the end credits song is also quite enjoyable.