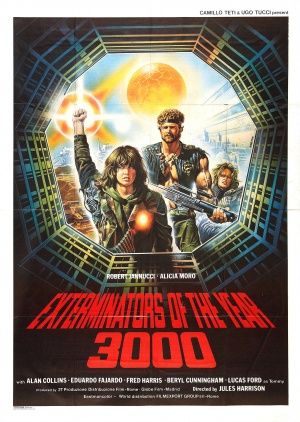 Director Jules Harrison’s (aka Giuliano Carnimeo) low-budget Italian / Spanish blend of “The Road Warrior” and Death Race” blows up all over the screen with exciting car crashes and chases. To add even more camp to the movie, the most ridiculous dialogue you’ll ever hear is overdubbed as half the cast speaks English and the others shout their lines in their native tongues.

In “Exterminators of the Year 3000,” the post-apocalyptic earth is a desert and water is the most precious substance of all. A band of survivors must turn to a mysterious stranger (Robert Iannucci) to battle a ruthless gang of motorcycle psychos for control of the wasteland and the water. Can their reluctant savior defeat the sadistic outlaws and get the water back home before their supply runs out?

Every part of “Exterminators of the Year 3000” invokes images of other end-of-the-world films of the 1970s and 1980s. The demolition derby jousting and destruction is obviously heavily influenced by “Mad Max,” “The Road Warrior,” and the original “Death Race 2000.” The survivor’s compound, water plant, and other locations are extremely reminiscent of the ones seen in “Logan’s Run” and “Battle for the Planet of the Apes.”

Anti-hero Alien looks like he walked off the set of “Megaforce” wearing Barry Bostwick’s hair and headband combined with Peter Hunter’s costume from “Spacehunter: Adventures in the Forbidden Zone.” Alicia Moro’s wardrobe and makeup department appear to have watched episodes of “Battlestar Galactica” and studied Farrah Fawcett’s hairstyle in “Saturn 3” to get their inspiration. Head bad guy Fernando Bilboa looks as if he was given permission to raid the left-over wardrobe from “The Road Warrior” for his outfit.

Although it’s nowhere near as graphic as movies of this nature would be today, “Exterminators of the Year 3000” is rated R. It contains violence and gore, profanity, alcohol use by a minor, and frightening and intense scenes. The scene of a young boy downing beer after beer as a pain killer might offend some. One other sequence has our heroes battling mutants that resemble the deformed ones from “Beneath the Planet of the Apes.”

“Exterminators of the Year 3000” is the perfect film for those who have ran out of “Mad Max” and “Death Race” flicks to watch. It’s a B- movie to top all B-movies that conjures up the same tingles and giggles you get when watching anything Roger Corman produced or directed in the 1970s and 1980s. With the release of “Mad Max: Fury Road” so close on the horizon, I can’t think of a more fitting time for audiences to enjoy this little known cult classic.