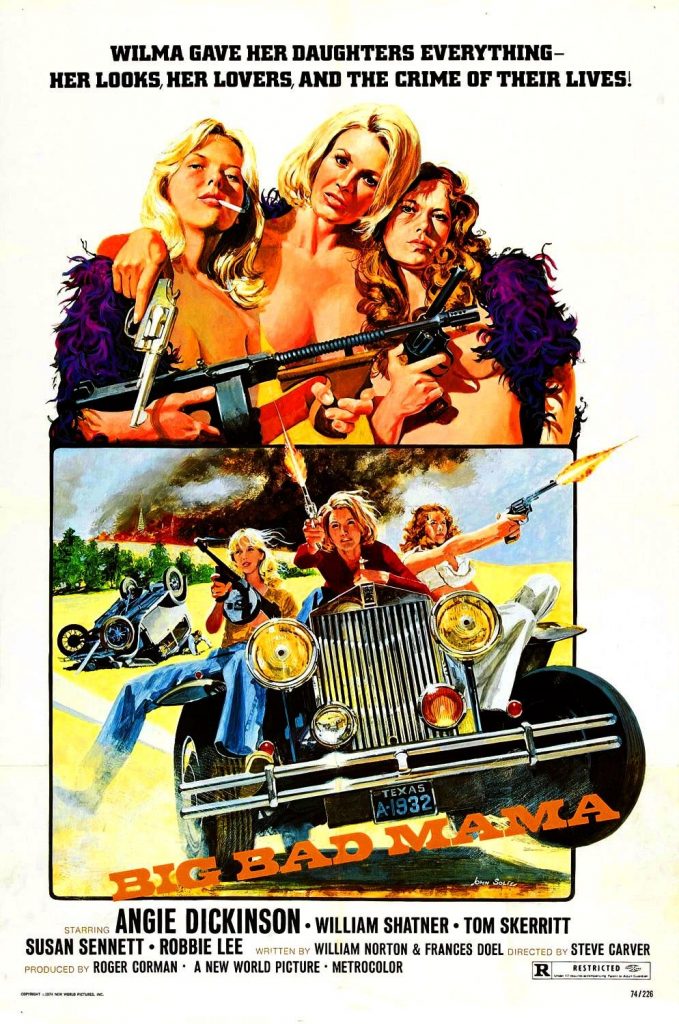 Angie Dickinson got the role of her career playing the title character, a Texas mother of two teenage girls (Susan Sennett, Robbie Lee) who grows tired of being poor and decides to turn to robbery. Along the way she picks up a couple different men (William Shatner, Tom Skerritt) as they head towards California to make it rich. If you’re easily offended then this might not be the movie for you but if you like sex, bloody violence, nudity, threesomes with sisters, robberies and just about every other sinful thing in the world then BIG BAD MAMA is just the film for you. I don’t think there’s any question that this here is one of the greatest drive-in movies ever made and from the opening dialogue where Dickinson is wondering why her “angels” turned out so “wrong” the film just delivers one great thing after another. Of course, those expecting CITIZEN KANE are going to be disappointed but to this day I can’t see why certain film buffs go into every movie expecting a masterpiece. Some movies need to win Oscars and others like this one just need to be entertaining. It’s very clear that the writers, the director and producer Roger Corman wanted to throw just about everything into this film that they possibly could. One of the big selling points in having someone like Dickinson appear in a movie like this and her presence certainly adds a lot. I’m sure most of her fans will be downright shocked to see her appearing in several sex scenes and she’s nude for three different scenes including one full frontal. In interviews she has said that she wanted to show off her body and it’s easy to see why. Dickinson is so good in the role that you can’t help but love her character and the toughness she brings to it. Both Sennett and Lee are good looking in their parts. Those expecting great performances are going to be disappointed but I think both actresses delivered just what the film needed in terms of good humor. Shatner and Skerritt are both very entertaining in their roles and Corman regular Dick Miller plays a nice part as well. Considering how low of a budget this movie had it’s rather shocking to see how good the costumes are and the period detail is really terrific because you feel as if it’s really the 1930s. Director Carver does a very good job at keeping everything going at a nice pace as the 82-minute running time goes by without a problem. BIG BAD MAMA didn’t win any Oscars when it was released but all these years later the charm is still there and it certainly deserves its reputation as one of the best drive-in flicks of the era.