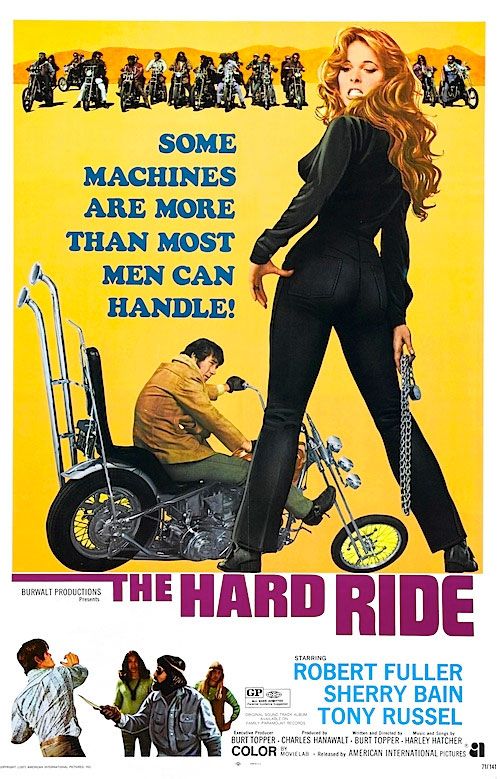 (Some Spoilers) More like a “Guess who’s coming to the Funeral” type movie then the usual biker flick of the 1960’s and 70’s cranked out by AIP Pictures. “The Hard Ride” tries very hard to make some kind of social and political statement on race relations with the female star Sheryl, Sherry Bain, having had a hot and steamy affair with the dead US Marine Lenny, Alfonso Williams. Lenny’s best friend and Marine buddy Phil, Robert Fuller, brought back his body from South Vietnam for burial but that angle falls completely apart within the first ten minutes of the movie.

Lenny leaves behind his last will and testament to his adopted father Catholic priest Father Tom, Marshall Reed. Lenny only mentions Sheryl who you would think were inseparable as just someone Phil should look up. Lenny want’s Phil to get the address of Big Red, Tony Russel, in order to give him his, Lenny’s, prized chopper affectionately named “Baby”! You get the feeling that it was “Baby” that Lenny was really in love with not his girlfriend Sheryl. Sheryl comes across more like a girl bartender that Lenny met in the local bar ,where he got good and drunk, and only remembered her name at all because she served him a load of free drinks.

Trying to find where Big Red was Phil get’s involved with a local biker gang who’s leader Grady, William Bonner, claimed to be Big Red in order to get Lenny’s chopper Baby. Seeing through Grady’s lies in him claiming to be an Native American, yet having a full beard, Phil escapes from Grady’s bunch on the wheels of Baby. At the place where Sheryl is working as a waitress, Mom’s Diner, Phil gets her to take the afternoon off so she can help him find Big Red and have him and his bikers attend Lenny’s funeral; as well as sign Baby over to him like Lenny wanted in his will.

The movie has both Phil & Sheryl go through a number of close calls with the highway police and a bunch of local sh*t-kickers all over Baby that Phil is using, together with Sheryl, as transportation in his quest to get to Big Red’s place. Big Red’s hangout turns out to be the notorious Shannon Whorehouse just outside this God-forsaken place called Dead Man’s Point. Big Red having fun with one of the hookers is angered by Phil unexpectedly dropping in on him. When he sees the chopper Baby Big Red quickly changes his mind and as for the pretty Sheryl he suddenly gets the hots for her despite the hooker that he’s engaging with. Later after him making a snide and offensive play for Sheryl it leads him and Phil to duke it out to the sounds of exploding artillery shells and machine gun fire just like in Nam.

Back at Mom’s Diner Big Red and his boys are about to attend Lenny’s funeral only to have one of the main speakers, together with Father Tom, kidnapped by the Grady Gang in revenge for what he did to him earlier in the movie. Grady also steals Baby to keep it all for himself. Big Red showing up at Grady’s desert hideout with his bunch tells Grady that he can have and do what he want’s to Phil but that Baby is his and with Phil, who’s name the bike was legally in, being forced to sign Baby over to Big Red. This gives Big Red and his bikers just enough time to catch Grady & Co. off guard that leads to a wild and deadly free for all with Phil ending up shot dead by one of Grady’s men.

The movie’s sad ending has not only Lenny but his good and close Marine buddy Phil buried together to a full US Marine honor guard with a tearful Sheryl and Big Red & Co. in attendance. Phil kept his promise to Lenny by bringing him back home to the states and making sure that he’ll get a full Marine and Biker burial. What Phil hadn’t expected was to always be at his side by being buried together along with him.