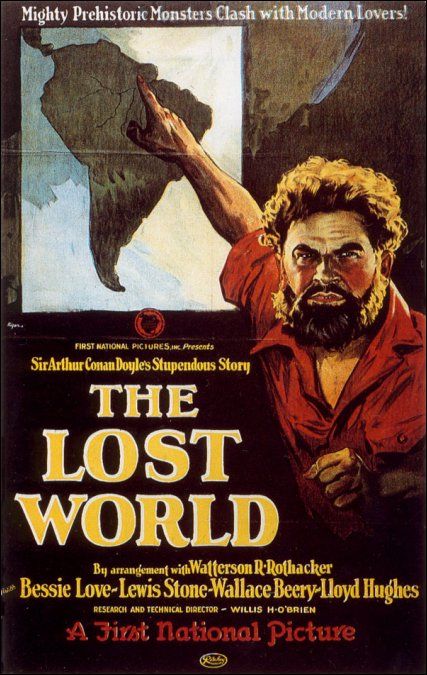 In this 1925 silent era film, a Professor Challenger (Wallace Beery) leads a group of British explorers to South America, to prove to the civilized world that there exists a land of living prehistoric creatures. What the explorers find is exactly that … a rugged Amazon plateau inhabited by all kinds of dinosaurs. It’s a wonderful film concept befitting Sir Arthur Conan Doyle’s adventure novel. The dinosaurs were brought to cinematic life via stop-motion animation, the first time that the then new technique had been applied, on such a grand cinematic scale. For its visuals alone, “The Lost World” is an important film.

The problem I have is not with the film, but with the way the film has been mishandled in the eighty years since it was released. Much of the original film was lost or cut out, a sad commentary on the way our culture has underestimated the value of silent films. Recently, the film has been at least partially restored. That, in turn, has led to confusion as to the extent to which the film being watched reflects the original.

My understanding is that there is or was: (1) an original full length version, no longer available; (2) a thirty-two minute version shown as a short film; (3) a sixty-three minute original DVD version; and (4) a ninety minute restored, extended DVD version complete with soundtrack and commentary. None of these versions are exactly alike, and there may be other versions as well.

The version I watched was on DVD, and was sixty-three minutes in length; there was no soundtrack, no commentary. Since this version is vastly different from the original, and different from other versions, a conventional critique would be unfair. All that I can do is to make a couple of general observations.

The special effects were impressive for their time. But what I most liked was the film’s sense of three-dimensional scale, as shown in many scenes, the tree bridge to the plateau, for example, or the rope ladder hanging down the side of the cliff with a person climbing down. Such scenes convey a sense of distance and height, important to any physical adventure or risk. What I found disconcerting was the scenes of dinosaurs detached from the characters. Most of the time, but not always, these dinosaur scenes were shown from the POV that would be optimal for the cinematic viewer, rather than from the POV of the characters. In other words, the dinosaurs were usually shown out of context to the film’s narrative.

“The Lost World” (1925) is an important contribution to early cinema. Although the film may be somewhat tedious to watch and technically crude by today’s standards, depending on version, the film will most surely be appreciated by film historians and by technicians interested in the evolution of cinematic special effects.