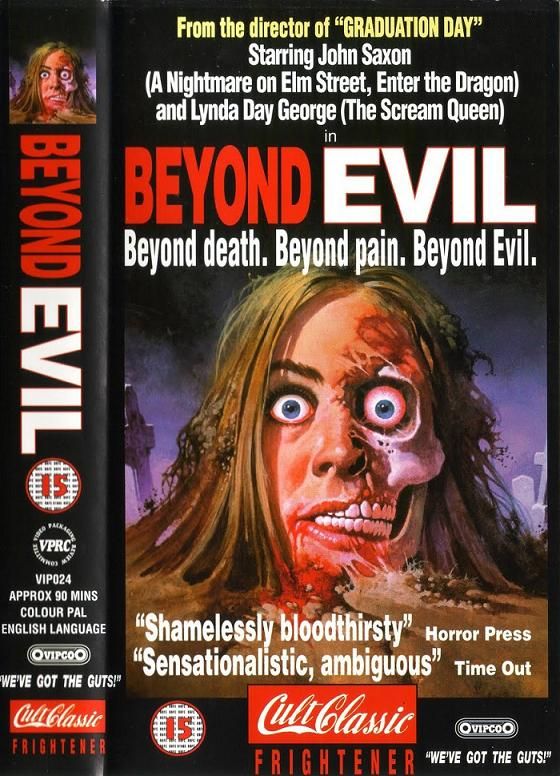 I am a sincere horror movie fan. As such, I am extremely forgivingindeed, my friends would argue I have no standards at all. To shake up this dynamic even more, there is a class of film that forgiving fans feel compelled to huddle around and protect because these “works of art” are so obviously vulnerable to attackmostly because they suck in every way imaginable. Remember Robert Culp crazily running around naked in “A Name for Evil?” (Whoever says anything nice about “A Name for Evil?”) Remember a coiffed Richard Moll attempting to navigate the discontinuity in “The Nightmare Never Ends?” (What dozen or so people ever bothered watching “The Nightmare Never Ends” in its entirety?) How about Trish Van Devere flitting about the badly lit sets in her housecoat in “The Hearse?” Technically, these films are inconceivably bad, plain and simple. They never really gel; they don’t scare; the characters are flat or unconvincing; the lighting is poor; the sound is cacophonous; the plot convoluted. These movies always seem to be a collection of medium-range shots pasted haphazardly togethernot an interesting angle or lighting effect to be found. These films don’t even fall into the clichéd “so bad they’re good” class of films.

In my mind, films like “A Name for Evil” are “TV quality” films (if we are talking TV quality of about 30 years ago, of course). In fact, the most effective way to turn me off from wanting to watch any film is by telling me it is of average TV quality. To me, that means artless, white-washed, vanilla, predictable, flat. I’m immediately disinterested.

Having said that, films like “The Hearse” and “Nightmare Never Ends” and even “A Name for Evil” almost supernaturally, are imbued with something greater than the sum of their parts. In the minds and hearts of truly forgiving horror movie fans, these films hold a place that they do not deserve; there’s something about the “idea” of the movienot borne out by the reality of the film itselfthat exerts an inexplicable power. I guess what I’m saying is that these movies are never as good as the ideas behind them; but for some reason I, as viewer, seem to remember and connect with the idea, rather than the movie. Call me insane, but it is almost as if the movie doesn’t matter. For example, when I spy the DVD cover of “Horror Planet” on my shelf, I think of the “idea” of the film fondlyeven though I never really want to watch the film a second time because it is so poorly executed. I imbue it with a power it doesn’t really have. And I’m fascinated by that interaction. Maybe I’m just nuts.

Now, having said all that, I’m not sure “Beyond Evil” quite makes it into that mysterious class of films. The ideas in this film (not the film itself) try damn hard to work their way into my subconsciousbut ultimately the flick fails in that regard. The acting is adequate, even adequately inspired at times. The music by Donaggio is adequate. The plot is okay. But when it comes right down to it, I think there are three specific things that ultimately do this movie inthings that are so completely distracting, I can’t even love the idea of this film, let alone the film itself:

1. Could You Repeat That Please: The film takes place in a large mansion, mostly. Here we get the “one Radio Shack mic placed in the middle of the cacophonous room” effectoften with more than one person speaking at the same time. Remember the award-winning audio in films like “The Ghosts of Hanley House?” Terribly distracting. As someone else also said, this movie is evidence why filming in front of an airport is not such a good ideadid you catch that dialog? I didn’t. Planes are loud and noisy. Someone tell the director.

2. The Editor Fell Asleep at the Cutting Wheel: Something bizarre happens in the last 15 minutes of this movie (referring to the UK PAL R2 DVD). Suddenly parts of the film disappearthere are plot elements you KNOW occurred, you’d bet your paycheck on it, but they’ve been sliced to the point where the narrative starts to literally come apart at the seams. Once again, I am a forgiving fan here and can even appreciate discontinuity on some artful level. But this isn’t epileptic enough to be interesting or keep me off balance. No, it’s just that somebody let the scissors slip a few times, and the film falls apartliterallyin the last few frames. Why oh why?

3. Attack of the Special Effects: The effects in this movie, as other reviewers have adequately illustrated, are atrocious. Remember, I am a forgiving fanprobably much more forgiving than you are. But when you see something so low–that you start to think you might actually have standards of some kindyou know you’ve hit rock bottom. The effects are really at rock bottom. They are so bad, they chew into the narrative. While watching, I was having a conversation with myself (as the movie progressed) about how the ghost of the former owner of the mansion could have been presented so much better, and so much more simply. Glowing green laser beam eyeballs. Awful, awful, awful. The silly superimposition of the ghost character that suddenly blinks into life on a dark space in the picture’s frame. Awful, awful, awful. I think of all the scary movies I’ve seen where ghosts were presented simply and interestingly and frighteningly without a special effect to be found. Why would adequate-director-Herb-Freed make such a bad, bad decision?

So there you have it. An unforgivable “TV Quality” movie where ultimately the ideas don’t even float to the top. Too bad, too bad.