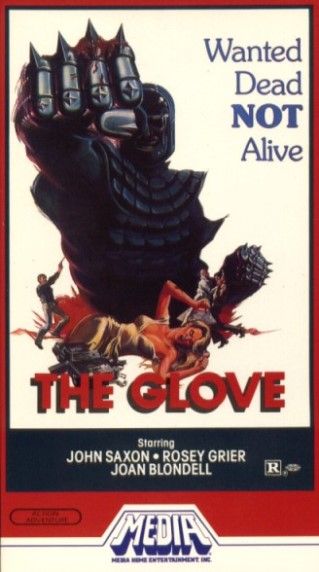 A film like this can’t be rated on any normative 1-10 scale which we usually enlist to appraise the world’s great cinema landmarks. This movie appeals only to the shrewder connoisseur of the halt and the lame, the distressed, and the warped. There is no scale for such a movie as ‘The Glove’ (except perhaps if we use negative integers or decimals).

‘The Glove’ has that quintessential charm of the 1970’s movie. The grainy stock, fuzzy sound recording, squinty leading men, large automobiles, aimless & episodic screenplay; yes, everything right down to the sentimental piano notes in the score wordlessly ‘decrying the violence deep inside man’.

The plot is simple at first. Hulking Marauder, methodically eliminating Taxpaying Citizens in a Relentless Revenge Ritual. Big and ugly in the black leather outfit (+ black motorcycle visor helmet?? yes!) has some incredible wicked strange instrument of death–fascinating in its own unique way–a bonafide ‘restricted’ riot-glove {sometimes used by law enforcement personnel in the course of their 1970s duties}. You can still buy these via mail-order, you know. They are fearsome devices. OK so, simple plot wrapped around an obscure piece of morbid guy-gear–true. But this film is not without character or psychology.

I say, any film with Rosy Grier is worth a look. Need I remind you of ‘The Thing with Two Heads’? Now, in this movie, Grier plays his role with restraint and aplomb. Let’s give him some credit. Even if just for his sheer physical size, he is interesting to watch. Combine that with his wispy, faint-hearted voice (in this film, philosophizing about ‘defining boundaries’ and ‘the cyclical nature of violence’ and you have the basic ingredients for a memorable cult film. In one scene he even plays guitar.

In fact, he is jovial throughout most of the flick. It’s perfect. He plays the anti-hero well, and by the end of the movie, fully manages to evoke a twinge of sympathy. Makes an engaging contrast with our growing suspicion that of course, it is him committing these brutal executions.

The violent scenes we witness (as the film develops), fyi, are not boring at all! Lovable Aldo Ray (another big guy, remember him from ‘Battle Cry’?) getting “the Glove treatment” while he is trying to instead cage some nooky in the shadowy back seat of what looks like a Chevy LeSabre. Coitus interruptus! Fantastic. 70’s film-making at its seamy best.

Another great ‘Glove revenge’ scene: a revisitation of that old stand-by of the 70s thriller–masked assailant and victim thrashing around in a brightly-lit bathroom, with the shower curtain flailing wildly around and the light strobing. Ending with victim seeping blood over white grouted porcelain tile. Classic.

As for John Saxon: he is fine in this movie. He does his best. Makes it look sincere as he can. He has a secretary he is pursuing, debts to pay, a young daughter to raise, a great old Caddy convertible to keep up–this is a sensitive guy. You can see he is not really that into the violent side of his work. This is a character that has some delicacy, not just the usual 70s slob cop/bounty hunter/detective.

Saxon’s character is soft-spoken–shrewd–and good at his job, where his job requires brainwork. Where it requires the strong arm stuff–well, we see that he gets by. But here’s where the psychology comes in: Grier (the suspect) is not just a dumb ex-con and through their game of cat-and-mouse he gradually works on Saxon and makes Saxon at least see Grier’s motives for the crazy glove killings.

So the interplay between Saxon and Grier is basically where it’s all at in this film. And of course that fiendish glove. You just gotta wonder what its like both to hit someone with that thing and also to get hit by it. Anyway, Grier, tired of being chased, forces Saxon to give him a fair fight. And he gets it. And that Glove is used one last time.

Guys, a good fight scene like this deserves our esteem. Take another look at what’s going on. Would you accept the terms of the final fight as laid down by Grier? You can at least see how smart he is, by arranging it just in this manner? Its clever resolution to what would be, in any other movie of the same stripe, just another shootout.

This movie is worth recalling in any retrospective of twisted B-violence flicks. I personally, will always recall ‘The Glove’ with some fondness.