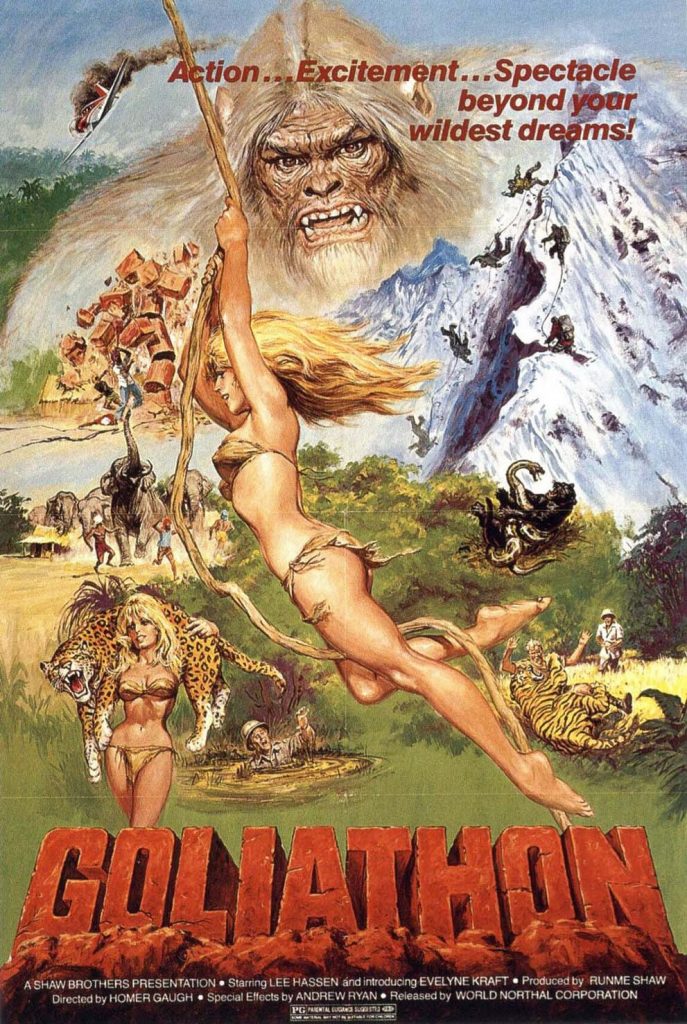 Man, these B gems are fun to watch. Shaw Bros Studios definitely pay homage to the King….Kong that is. Beware the Mighty Gorilla suit!

This movie teaches you so much! When heartbroken, sign up for a dangerous, life threatening expedition which probably means getting only a one way plane ticket. Danny Lee is good as the hero and for donning those crazy big lapels. Other times, he looks like he had a fun time with Evelyne Kraft since he’s always got his hands all over her! There’s also a weird triangle going on…don’t mess with a gorilla’s woman. The big guy likes to watch. Kraft as Ah Wei is pure eye candy and she works well with Lee (I had to laugh at the sappy love chase scenes in the deep jungle…of INDIA??? I thought we were in Peking!). Also, Shaws pulled out all the budget stops with model villages and miniscule downtown Hong Kong. It just gets the film more points in the shlock category. Laughter ensues during the stampede guns firing at the rear projection screen. One villager really gets a “leg” up during the goofy tiger scene. 15 minutes into this one and you get a feeling who the sleazeball is going to be. Was it just me or was there a lot of sexual innuendo with Ms Tarzan and the tree/light pole straddling?

There’s also reckless carnage, a crazy hellbent army commander, millions of dollars in property damage…well, maybe $100 worth of model kits. Watch for that big hairy hand and the kooky Tonka dump trucks. You know, despite the fact that there’s a 6 story massive gorilla in the city, the people of Hong Kong took it very well.