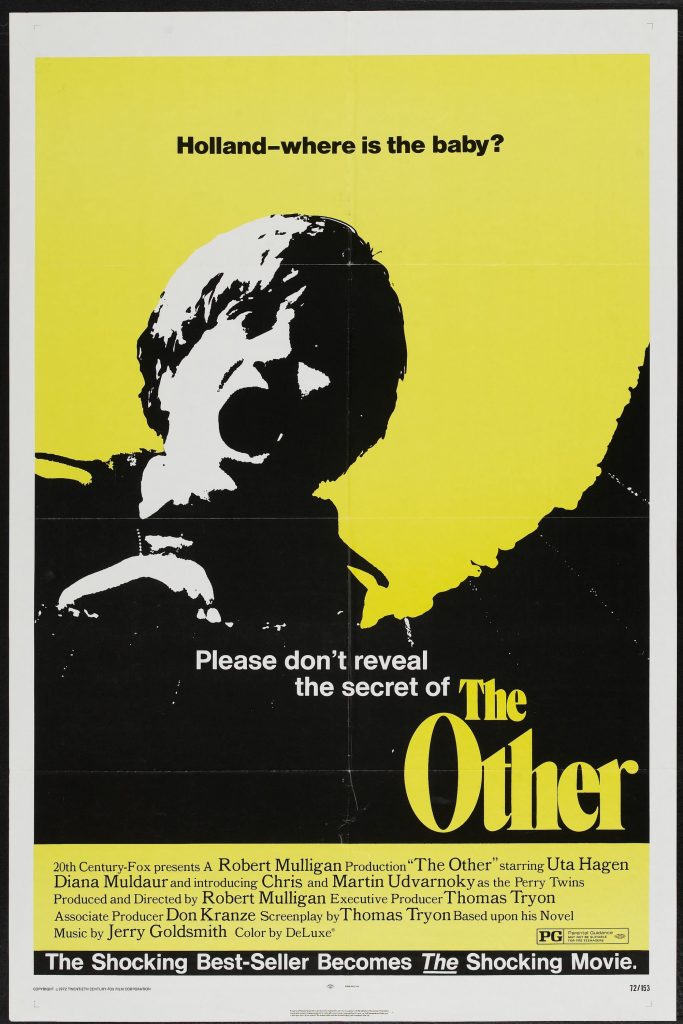 “The Other” is an adaptation of the Thomas Tryon novel, scripted (and executive produced) by Tryon himself, which tells us a story of evil set against the backdrop of a peaceful farming community in Depression era Connecticut. Director Robert Mulligan (“To Kill a Mockingbird”) milks the location for a lot of atmosphere – and the finale is particularly sinister – but the horrors of this film are largely psychological, which will appeal to those genre fans looking for something subtle.

It stars legendary acting teacher Uta Hagen, in one of her rare film roles, as Ada, the doting grandmother to twin boys Niles and Holland (played by actual identical twins Chris and Martin Udvarnoky). Niles is the more grounded one and Holland the more mischievous one. They also live with other relatives including an incapacitated mother, Alexandra (Diana Muldaur). Niles has been taught a special “game” by Ada, which allows him to see through the eyes of others.

But don’t let that lead you to believe there’s much if any of the supernatural in this story. It’s done in a more realistic manner, and the effectiveness of the film hinges on ambiance, mood, and performances. Hagen is quite wonderful, and the Udvarnokys – who unfortunately never made another film – offer completely natural, unaffected portrayals. The excellent cast also features Victor French, Lou Frizzell, Portia Nelson, John Ritter (in one of his earliest big screen appearances), Jack Collins, and Ed Bakey. Production design (by Albert Brenner), cinematography (by Robert Surtees), and music (by Jerry Goldsmith) are all beautiful. This is one of those films that does take you back to a different time and place. The end is haunting and not likely to be forgotten by the viewer anytime soon.

The story’s critical revelation actually occurs sooner than you might expect, but things only build from there; Tryon still has more twists and turns up his sleeve.

Highly recommended to horror fans, especially those who favour the traditional variety of horror.