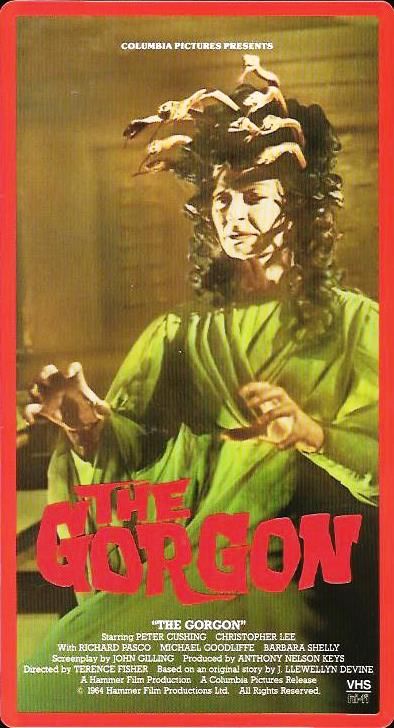 “Overshadowing the village of Vandorf stands the Castle Borski. From the turn of the century a monster from an ancient age of history came to live here. No living thing survived and the spectre of death hovered in waiting for her next victim.”

Directed by Terence Fisher for Hammer Film Productions, The Gorgon stars Peter Cushing, Christopher Lee, Barbara Shelley and Richard Pasco. Photography is by Michael Reed, the design courtesy of Bernard Robinson and the unique score is by James Bernard {he blended Soprano with a Novachord). Very much a bit off kilter in terms of classical Hammer Horror, The Gorgon sees Hammer turn to Greek Mythology for its latest instalment.

The key issue here is that The Gorgon should be viewed more as a doomed love story featuring a legendary horror character. To call this a horror film is just wrong, and marketing it a such has done the film few favours over the years. Fisher always thought of The Gorgon as one of his best film’s, and he was right to do so for it’s a hauntingly beautiful piece of work, that is also one of Hammer’s most visually accomplished efforts. Yes the effects of the Gorgon herself come the finale are low budgeted naffness, to which if it had been possible to never show close ups of her the film would have been greater. More so because all the prior long distance shots of her have gained maximum chill factor. A floaty green demon accompanied by eerie music, effectively shot in dreamy Technicolor by Michael Reed. But cest la vie, the story is such we have to have these close ups, so lets just embrace this minor itch for existing in a time before CGI and applaud its adherence to the Gothic tradition that the film faithfully captures.

Tho featuring the big Hammer Horror hitters Cushing & Lee, it’s Barbara Shelley who really takes the honours. Her Carla Hoffman is the axis of the movie, an emotionally conflicted character, beautiful yet sorrowful, she gets an in-depth makeover from Shelley. Further lifting the film above the average jibes bestowed on it by cruel and unfair critics. Patrick Troughton also lends some good support as Inspector Kanof, wonderfully attired in Rosemary Burrows’ Gothic European costumes. There’s no bad performances in truth, all the cast are delivering good work to do justice to the material. There is no, if you pardon the pun, ham in this Hammer Horror.

A wonderfully told story is given a smart technical work over within the budget restrictions. Forget any hopes of a blood laden movie, for this is not the one.