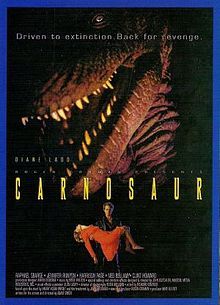 Roger Corman got the genius idea of going head-to-head with Spielberg’s JURASSIC PARK the same summer and even cast Diane Ladd, the mother of PARK’s Laura Dern. Sadly, the results aren’t that good. Dr. Jane Tiptree (Ladd) has created some genetically modified eggs that house creatures made up of the blended DNA of various things including iguanas, ostriches, and chickens. It is all part of her plot to destroy mankind. Standing in her way are drunk night-watchman “Doc” Smith (Raphael Sbarge) and environmentalist Thrush (Jennifer Runyon). The only thing sadder than this movie is that I felt the need to watch it again nearly 20 years later to confirm, “Yeah, it still sucks.” The film does have some bright spots in that the dinosaur attacks are gory and there are some funny Coca-Cola product placements. But the dinosaur effects are pretty bad and the script (adapting, but apparently not very well, a 1984 novel) is totally flat. Matching this flatness are woefully miscast Sbarge and the seemingly lifeless Ladd. Ladd, who probably only did 3 days max on this, has absolutely no pulse and delivers one of cinema’s worst mad scientists EVER. The film holds the distinction of being the last Corman production to ever play in theaters, grossing $1.7 million over a period of six months or so.