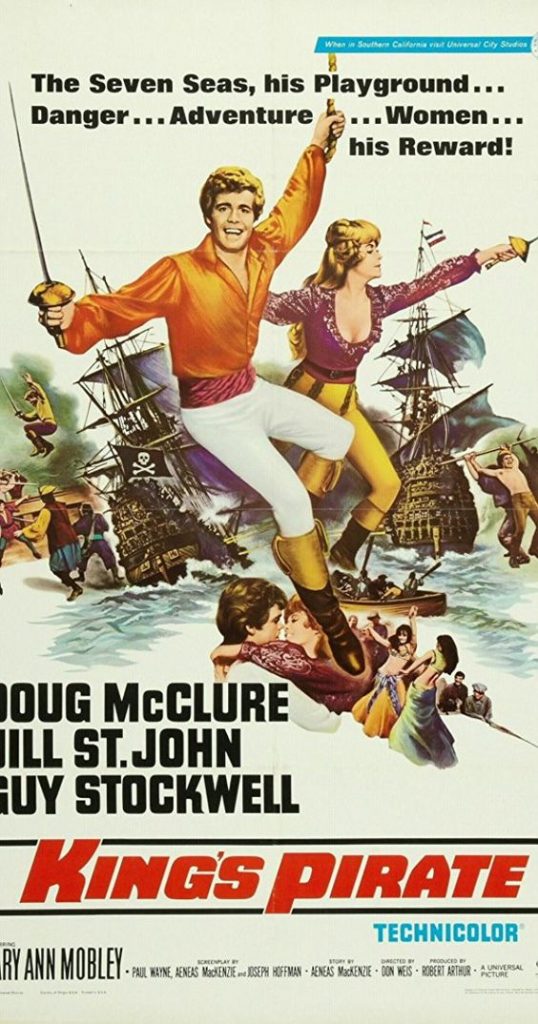 Universal International Studios produced this agreeable pirate comedy set in Madagascar, in 1700, with a British officer , Doug McClure , who must fend off the advances of daring enemies by baring his chest to pose as a pirate . Later on , in Madagascar he attempts to capture a known pirate played by Guy Stockwell and to seek a valuable treasure . As he has to infiltrate into Diego Suarez stronghold, Madagascar. At the same time , our starring slashing his way through the enemy fleet at the turn of century . Along the way the British soldier disguised as a pirate falling in love for two beautiful women, as a hot-tempered pirate moll : Jill St John and a tasty eyeful princess: Mary Ann Mobley , playing a Moghul damsel in distress who’s recently been taken captive . Happenings reach a spotlight in a shipboard battle when the authentic motivations are uncovered . The Seven Seas, his Playground…Danger…Adventure…Women…his Reward .

The film displays thrills, action, adventure, swashbuckling, and dazzling spectacle of swordplay . Although the stoy has been told before , tight filmmaking and nice interpretation win out . It results to be a remake of Against All Flags 1952 by George Sherman with Errol Flynn, Mauren O’ Hara, Anthony Quinn. And containing footage of the original film. Stars Doug MClure who gives a sympathetic acting as a likeable adventurer goes into problems obligingly in the sort of character once reserved for Tony Curtis. Doug McClure is pretty well as a handsome British Lt. officer, who is sent undercover to infiltrate a lively band of pirates and having to work smartly and quickly to chase a band of thieves . He is well accompanied by gorgeous Jill St John and former Miss America , the love-struck Mary Ann Mobley , as an Indian with Scots accent . Here stands out a large and notorious support cast , such as : Kurt Kasznar, Richard Deacon, Torin Thacher, Woodrow Parfrey, Sean McGlory, among others .

It packs a colorful cinematography in Universal Studios style and Technicolor by Clifford Stine . Lively and catching musical score by Ralph Ferraro . The motion picture was uneven but professionally directed by Don Weiss. He was an artisan usually working for TV in several episodes of Baretta, Mannix, Kolchak , Planet of apes, Perry Mason, Ironside , Hawaii 5.0 , The immortal, Rodeo and many others . And occasionally directing on big screen such as : Gene Krupa story, The longest hundred miles, Adventures of Hajji Baba , The ghost and the invisible bikini .