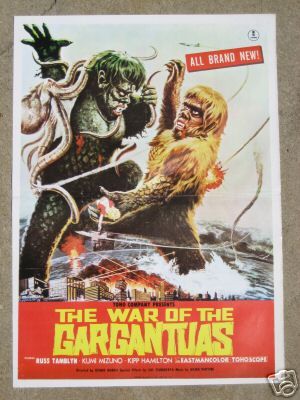 Supposedly a sequel to Frankenstein Conquers the World (1965) make no mistake that the two movies have zero connection and you won’t be seeing Frankenstein joining the fray here.

Another Toho monster film it see’s two giant monsters appear and the threat they may pose to mankind.

The monsters are dudes in monster suits and to the films credit actually don’t look all too bad. The rest of the sfx are what you’d expect from Toho so lots of miniatures and the usual array of scores.

I actually went into this with fairly high hopes but sadly they weren’t met. I like Toho but generally their serious work is considerably better than the likes of this, especially when the monster movie isn’t part of the Godzilla universe.