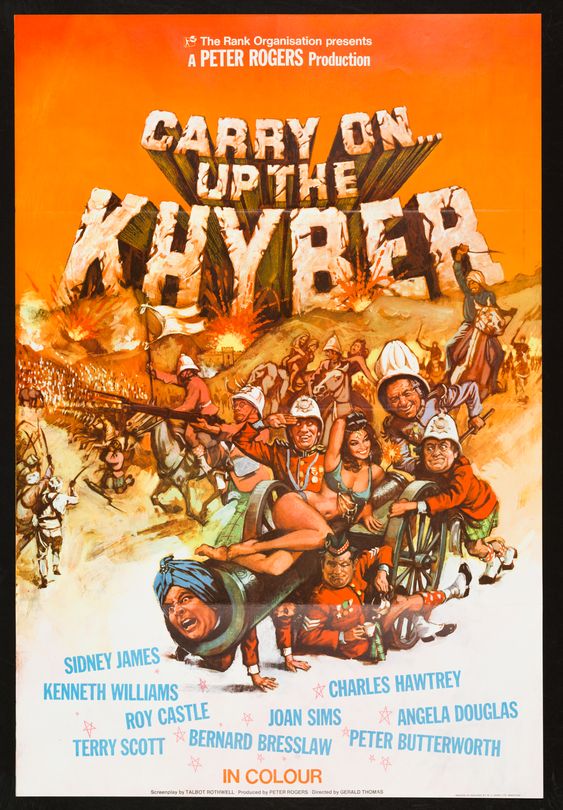 The Carry On series had many ups and downs, but this offering is the best of the entire series and a fantastic comedy in its own right. The jokes come fast and often and the overall quality of the film is apparent. This is the perfect Carry On line up too, Sid James, Kenneth Williams lead the cast which includes Charles Hawtrey, Joan Sims, Terry Scott, Bernard Bresslaw and Peter Butterworth, all of whom are at the peak of their craft. The addition of Roy Castle to the cast as the heroic lead is perfect and the sets and set pieces are great.

The story, which is one of the most coherent, is set during the British occupation of India during the reign of Queen Victoria. Sir Sidney Ruff-Diamond (Sid James) is thrust into the middle of a plot to reveal the feared ‘Devils in Skirts’ the British army who traditionally wear nothing under their kilts as underwear wearing oppressors by the Khasi of Kalabar (a deliciously sneering Kenneth Williams) who intends to start a revolution and end Sir Sidney’s cushy job. Stiff upper lips, cross dressing, randy missionaries, stolen underwear and a final brilliant dinner scene in the midst of a full scale revolt showcase the reason that the Carry On Series and not Monty Python is the best representation of British comedy at its finest.

Take a tea break and check out this comedy gem from the bosom of the British Empire.