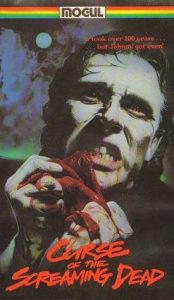 In “The Curse of the Screaming Dead” three irritating friends and their equally annoying girlfriends venture into the woods on a hunting expedition. They eventually find the ruins of a church and an abandoned cemetery filled with the graves of tortured Confederate soldiers. After the most annoying member of hunting party steals the diary of the Confederate commander, the Confederates rise from the grave and take their revenge.

I hate to kick a little film when its down, but the audience would have definitely been better served if real zombies had eaten the film makers before they completed this little monstrosity. Like “The Blair Witch Project,” this movie was filmed in the woods of Maryland. However, any similarity ends there. Blair Witch exhibited wit and imagination, both of which are absent from this movie. That isn’t to say that the story itself wasn’t workable. It was. We’ve all seen many variations on this tale. (Think “Night of the Living Dead” with a little “2000 Maniacs” thrown in for good measure.) It doesn’t take much technical prowess to make a story this simple work, but the film makers fall short. Way short. The ineptness of this film is almost beyond description, but let me try….

The acting is terrible, or, as a previous reviewer properly noted, nonexistent. I say this knowing that even Laurence Olivier would have problems delivering some of these lines. Overall, the zombie fare better than the living. All the zombies have to do is moan painfully — like the audience. Thematically, the film is a mess too. The dead rise because one of the living has “stolen their pain.” As one goofy character helpfully explains, the dead know their physical possessions rightfully belong to the living but they jealously hold onto their pain. Hmmm. Okay. Then why do they rise when the diary is stolen? Wouldn’t that count as a physical possession rightfully belonging to the living? And why do the dead want to jealously hold onto their pain? You’d think they seek peace in death. Oh well. I guess I’m asking too much from a film where characters step out of a frame with a dead, leafless winter forest behind them into a frame with a lush, green summer forest behind them.

As one scans the reviews on the internet movie database, one frequently sees the words “Worst Film Ever Made.” That title has been unjustly applied to many films. However, I believe this film rivals the famous “Manos: The Hands of Fate” as the worst film ever made. If the film makers were clever, they would have submitted the film to Mystery Science Theater 3000. Had MST3K devoted an episode to this movie, it would now be a true cult classic and they would be making more money.

Then again, maybe the film makers thought they made a good film.