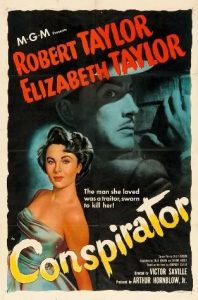 In her first adult role Elizabeth Taylor was all of 17 years old, but her co-star Robert Taylor who was a most discreet man when talking about his leading ladies, couldn’t help but remark about how mature Liz was when they made this first of two films together.

Her youthfulness helped because in Conspirator the part called for Liz to be young and somewhat naive. She’s not too much older in the film than her real age. And the role calls for the young American visitor to London, staying with Lord Wilfrid Hyde-White, Marie Ney, and their daughter Honor Blackman. At a ball Liz can’t take her eyes off officer Robert Taylor as neither could half the American female population. In a whirlwind courtship they’re married. Taylor is identified as 31 in the film and in fact he wasn’t too much older, being 38 when he was making Conspirator.

Taylor had played British before, no one minded his distinct American speech pattern in Waterloo Bridge. And it’s not a hindrance in Conspirator either.

Not long after they’re married Liz discovers her husband has been a Communist agent for years. As for Bob his marriage did not meet with party approval and he takes heat for it. And when she threatens to turn him in, Bob’s given a choice, it’s Liz or the party.

Conspirator is a sincere anti-Communist film, not a piece of Cold War junk like some of what was coming out of studios like RKO. The film itself was prophetic because a few years later Donald MacLean and Guy Burgess would be caught and exposed, after that Kim Philby and long after he was dead Sir Anthony Blunt, the famous fourth man in that subversive ring.

The problem with Conspirator is the lack of definition of Robert Taylor’s character, we get bits and pieces about an Irish mother, a forbidding English father stuff that might make him question loyalty to king and country. But it’s never really fleshed out in the script and Taylor never got a handle on his character.

Liz however really shows the promise she had as an adult actress. Two years later she was in A Place In The Sun and after that her career was assured.

Honor Blackman, the future Pussy Galore, was five years older than Elizabeth Taylor, but had made far fewer films. She was only in the third year of a career that’s still going strong. She also does a very good job as Liz’s wise young friend who just happens to be keeping company with one of Taylor mess-mates Robert Flemyng.

Conspirator was shot over in MGM’s British studio with its two American stars and a cast of players from the UK’s cinema. A little more development on Robert Taylor’s character and Conspirator could have been far better than it was.