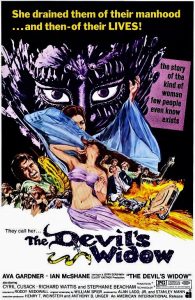 That’s the tag-line American International Pictures used to exploit this fantasy/horror film. Based on the ancient Scottish ballad “Tam Lin” (one of it’s many titles), the plot concerns an aging, beautiful woman Ava Gardner) who uses her wealth (and occasionally, witchcraft) to control a decadent pack of attractive young people she surrounds herself with. But when her latest young stud (Ian McShane) falls for the local vicar’s daughter (Stephanie Beacham), she vows revenge. The plot is fairly simple, though first (and last) time director Roddy McDowall does his best to insert as much ambiguity and mysticism as he can get away with. More of a fairy-tale allegory than a terror film, it was completed in late 1969, but ended up on the shelf when it’s production company, Commonwealth United, went bankrupt. Three years later, along came AIP, who bought it and edited it over McDowall’s protests. Devising a typically lurid advertising campaign, they exploited it as one of those “aging glamour star horror films” so popular in the 60s. Dubbing it “The Devils Widow”, it was spottily released in grind houses and drive-ins in late 1972, after which it promptly vanished. It did occasionally play on television, which is where I caught it, before landing on video back in the late 90’s. Althoug it’s not a “class” film, by any means, it deserved better treatment than this. The still-beautiful Gardner gives a striking, believably cruel performance, and the supporting cast includes several familiar faces who got their start here. Besides those already mentioned, Joanna Lumley (“The Avengers”, “Absolutely Fabulous”) is very much in evidence. The production is handsome, the photography well above average, and the movie improves as it goes along. Worth seeing, especially for Ava Gardner.