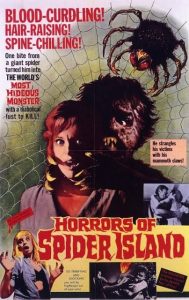 It doesn’t take you long to suspect that this movie was made quickly and cheaply, and the opening scenes with the ‘dance girl’ auditions is definitely a large signpost which says “Bad Movie Buffs Only”.

As you might expect from the title, there needs to be a way to quickly get our girls (and guy) to Spider Island, and the obligatory plane crash helps. It’s the highlight of the film, as the stock footage suggests we are no longer watching a DC-3, but rather a Kamikaze plane in a ball of fire rapidly dropping from the sky into a raging sea. The fact that they all manage to survive almost confirms the amazing optimism expressed by the girls manager back on shore, where he tells a distressed relative on the phone “No need to fear the worse, all we know is the plane caught fire and we lost radio contact”.

OK, I think its best come clean and reveal that the real horror of Spider Island is the appalling overdubbing of the voices. In fact, after a while, you start listening to the secondary sound effects, to see if they are as equally bad. I particularly like a scene where someone is showering in a waterfall, but the actual sound effect is that of someone gargling water. So, the film does manage in this way to keep your interest.

And, in a strange way, as the plot and women begin to be revealed, you begin to wonder what will happen next, only because you know it will not be logical, and probably will involve women fighting. And the women are great, a flash back to when buxom was in, women could really cat-fight, and they had no trouble in throwing themselves shamelessly at an ordinary man.

This movie was on the Treeline 50 sci-fi classics compilation – I suspect it is not readily available as a single release. The type of film you wouldn’t seek to watch, but if you are stuck on the lounge after a heavy pizza and it came on, you probably would end up watching it.