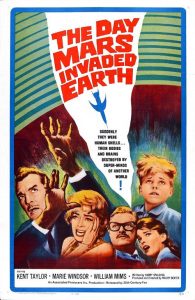 Upon first seeing this film as a youngster, I was frankly disappointed at the lack of a “bear” (to borrow the term used to describe the weekly monster featured in vintage Outer Limits episodes). What kind of monster movie is this, without a monster? They really saved on their budget by having their Martians be invisible–how lame, I thought. But upon seeing it again more recently, I was pleasantly surprised at its subtlety and stylistic nuances. There is a surprising and happy comparison with the Val Lewton/Jacques Tourneur horror films of the 1940’s, which stake their appeal on mood, atmosphere, and things the imagination conjures up–as opposed to the old Universal horror films which center on a classic monster. The other comparison would be with some old Outer Limits episodes, which often used a subplot founded on tensions in human relationships (e.g. a troubled husband/wife pair) as a driving force of the story, along with visually rich settings. This film does a similar thing, taking an unusually mature approach to its juvenile subject matter with interesting results. The musical score is effective and classy. In one scene, the wife/mother has to go out and check on a door which is reportedly open when its not supposed to be. This scene (reminiscent of a scene from the original “Cat People”) builds tension almost subliminally, with her looking around anxiously, as if someone is there watching. Suddenly she hears footsteps and gets scared. Soon she is fleeing, running down long outdoor landscaped corridors, overwrought. She almost stumbles upon a poolside statue which scares her–even ordinary things become menacing to her in her psychological state. There’s nothing hitting the viewer over the head, but rather a careful, slow drawing back of the curtain to reveal what’s happening, in a way that builds intrigue and suspense, versus having a boogie man jump out and go “boo!”. This zero-budget film has worn a soft spot in the heart of this scifi movie buff for its attention to little things that other offerings neglect. I recommend it to grown-ups nostalgic for the thrill they knew as youngsters watching saturday matinee monster movies, now frustrated because they can no longer suspend their disbelief at the sight of a rubber-suited alien monster as easily as when they were young. Story and characterization are this film’s strong suits, and it builds up to a shock end