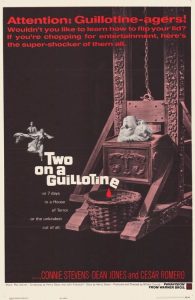 This is one of those films from 1965 that my friends and I went to in our small-town movie theater. I remember it as being full of those jump-out-at-you moments with people in the theater screaming. Connie Stevens is the heir to her father’s estate but must stay in the old house for seven days. He is one of the great magicians of his time and has promised, upon his death, to return to the house. The house itself is great fun, full of remnants of his magic world. There is a cabinet that opens when a switch is flipped, allowing a skeleton on a wire to come face to face with the unwary victim. The guillotine in question is part of the act that killed the man’s wife and assistant. Stevens then was farmed out and never saw her father again. She also never knew what happened to her mother. It’s full of fun stuff with a plot that shouldn’t be too closely evaluated. There are two characters that are left out of the will who become suspects. What they really know is always in doubt. Connie Stevens was a cute TV star at the time and well worth watching and makes a good victim. She is stubborn on the one hand and terrified on the other. She can also scream with the best of them. Dean Jones (a long time Disney staple) plays the love interest.