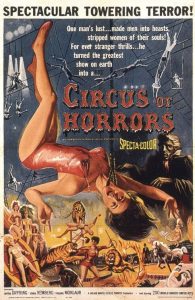 I recall seeing this film as a child in 1960. My mother was quite angry at dad for taking us to a movie that was “definitely not for children”. This is a grim story of a doctor fleeing some botched plastic surgeries. He takes over a backwoods circus and populates it with beautiful, yet disfigured female performers whom he restores to beauty and rescues from lives of prostitution and rejection. Of course, once the circus becomes successful, the ladies no longer feel like putting up with, or putting out for him, so he devises elaborate circus “accidents” to deal with their ingratitude.

The song “Look For A Star” permeates the movie at various times. At first, it’s almost unnoticeable, a seemingly lame early sixties pop tune. However, as the movie progresses it takes on a sinister, disturbing aspect and circulates the brain long after it is over.

The film is well acted and truly suspenseful. A must for those who like their sex and violence done in a literate, intelligent manner.