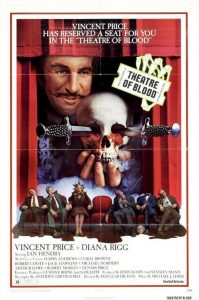 Vincent Price, the star of countless B-Movies from the fifties to the seventies, in his perhaps best role ever. This movie is wicked fun; a failed Shakespeare-actor brutally settles the score with all his critics – but they all meet their demise by having to “act” a part in the plays of the great bard. Very creative death scenes, gory and funny – and absolutely beautifully acted by Price and an ensemble of many greats of British cinema and theatre.

Funny enough, there are many parallels between Price’s own career and his character’s (maybe that’s exactly why the director chose him for this part), for Price also failed to get the recognition he deserved until very late in his life and felt unfairly treated by critics. Although many of his films are now regarded as classics, for the most part of his life his films and his (indeed rather Shakespearian) approach to his roles was often ridiculed. Around the time of this film though, critics started to take Price seriously (probably out of fear, LOL).

But this film is also interesting for another reason: despite the obvious black comedy it looks almost like a blueprint for a certain category of horror films to come, and films like ‘Seven’ and ‘Saw’ owe perhaps a little debt to ‘Theatre of Blood’.