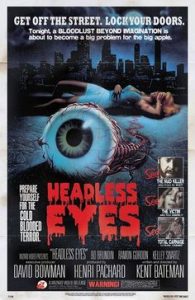 My eyes! AAOOOAAAUUUGGHH! My eyes! That’s what I screamed myself after watching this atrocity of a film. No gore, no effects, no acting, no sense. The movie opens with a guy robbing a woman’s apartment while she sleeps, and when she wakes up and screams, he tries to silence her by getting on top of her and smothering her mouth and nose. Fortunately she grabs a nearby spoon on the nightstand and slides it along the intruder’s temple – no wait, she actually penetrates his eye socket with it!?! With his eye popped out and dangling by its nerve, the man stumbles out of the apartment, out the hall, down the fire escape and crawls to a stop in the alley. The entire time howling the ever-looped line “My EYE! My eyyyyyye!” In case you miss him hearing it during this opening credit sequence, don’t worry. It’s played and replayed every 7 minutes for the rest of the film. During which time we see the main character (who happens to be a failed artist of some sort) finally get his comeuppance by cutting out the eyes of women and “freezing” them in blocks of ice (?) as art.

The highlight scene has to be the news report in front of the apartment of one of the killer’s first victims. First of all (as someone else has pointed out), nobody shows the first hint of suspicion about the creepy-looking guy with the eyepatch being at the crime scene where the victim had her eyes cut out. Secondly, since when are funeral services held at a person’s apartment building, complete with coffin being carried down the steps into the street? And lastly, you gotta love the reporter’s interview of the folks. He asks one woman what she knew about the murdered, and her answer is pricelessly generic. Perplexed at the woman’s response, the reporter realizes he has lost track of who the actor with the scripted line is amongst the crowd and openly calls out the improvised line, “I understand one of you knew the victim quite well” to find the proper response. Obviously, whoever it was that had the all-important line for the scene was stuck in traffic when it was filmed, because we don’t get any good answer for the poor reporter.

0 126
The Highest of Low Standards: How ‘MST3K’ Picked Movies to Mock