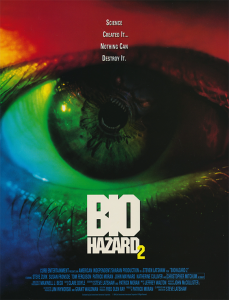 Following the success of the 2002 adaptation from video game to film that was ‘Resident Evil’, comes its tantalizingly-trailered sequel, ‘Resident Evil: Apocalypse’. I have to say, I was entranced by the trailer of this film. I seriously thought that this film had the potential to rise above ‘Mortal Kombat’ (1995) and ‘Resident Evil’ as the best cinematic event to spawn from a video game. ‘Apocalypse’ doesn’t do everything wrong, but it certainly doesn’t do everything right.

Let’s start with a brief synopsis. Firstly, this film picks up literally days after the first drops us off. ‘Apocalypse’ opens with a rehashed explanation of what we learned about the two main characters in the original, Alice (Milla Jovovich) and Matt Addison (Eric Mabius). Again, we are told that this Umbrella Corporation is an international super-power and that Alice is (or more accurately was) the head of security in an underground research facility dubbed “The Hive”, which harbored research and specimens pertaining to biological weaponry. After that, we are treated to the scientists who wheeled Addison away at the closure of ‘Evil’, opening the zombie-infested annals of “The Hive”. Immediately before the audience ‘knows’ what happens (its pretty obvious and is given away in the final shots of the first ‘RE’) we transition into a militaristic evacuation of important personnel associated with Umbrella Corp. After a few assorted events that do (and simultaneously do not) move the plot line (a ‘do not’ being the lead-scientist asking how bad the situation is). After this, we are introduced to nearly a half-dozen other characters, including a renegade police officer (Sienna Guillory), the remaining members of an elite task force (Oded Fehr, Zack Ward), a VERY stereotypical Black man (Mike Epps) and a hulking creature (which, if you paid attention to the first ‘RE’, you would be aware of its appearance) that totes both a rocket-launcher and a hand-held chain gun named the “Nemesis”.

As far as performances go, the aforementioned actors and actresses do well with the material that they are given. Guillory has Helen of Troy (not from the film ‘Troy’) on her resume, as Jovovich has Joan of Arc, Fehr has the mummy hunter, Ardeth Bay from the ‘Mummy’ series and Epps is credible in several comedies. There is no real emotion in the script, so the viewers really can’t ask for any emotion from the actors (sadly true).

That is where ‘Apocalypse’ stumbles, and in many places, falls on it’s face.

The plot is paper thin with nearly no real complications for the audience until the last ten minutes (which is a near-complete turn around from the original, which actually evoked SOME thought from the audience). It is basically unleash zombies on the city and shoot ’em up. The small sub-plots really vary from little to no relevance in the story whatsoever. It is pretty predictable that there is some kind of ‘oh no, my friend was bitten and eventually, I’ll have to kill him just before he bites me’ situation, and the big action/set pieces are blatantly set up. The characters are thinner than the plot, with their arcs being straighter than a steel arrow. Alice begins the movie as an ass-kicking femme fatal, and finishes the film being…oh, you guessed it, an ass-kicking femme fatal. Jill Valentine (Guillory) is another one of these masculinely tough females, although sans Alice’s super powers. The only real life that is brought to the script is through the epitome of black stereotypes, played by Mike Epps. It was sadly ironic, however that my favorite bit of ‘Apocalypse’ involved a reference to another video game franchise.

Again, ‘RE: Apocalypse’ is not completely bad. Although few, it has its moments. Mike Epps has his funny lines and his one encounter with the Nemesis brought laughs from the entire audience, which was something needed in the film. The Nemesis was done well a majority of the time (although there is a bit where the big oaf crashes through a wall and his head piece actually shifts visibly on the actor’s shoulders) and makes a formidable villain for a good margin of the film (although his closure is a bit weak). Many of the action sequences had great potential…but the majority of those action scenes were fast-cut, much like ‘AvP’, so much so that it was very hard at moments to see exactly what was happening in the shot.

‘Apocalypse’ suffices much more as an action movie than it does as a horror film, and it struggles to keep interest, even for someone who has faithfully played the video games. I will be glad to admit, though…’Apocalypse’ has the BIGGEST, most unexpected scare of 2004. I won’t say when or where…but I am glad to have experienced it. ‘Apocalypse’ isn’t exactly worth all eight dollars of your admission fee, but it doesn’t make a bad Saturday afternoon matinee