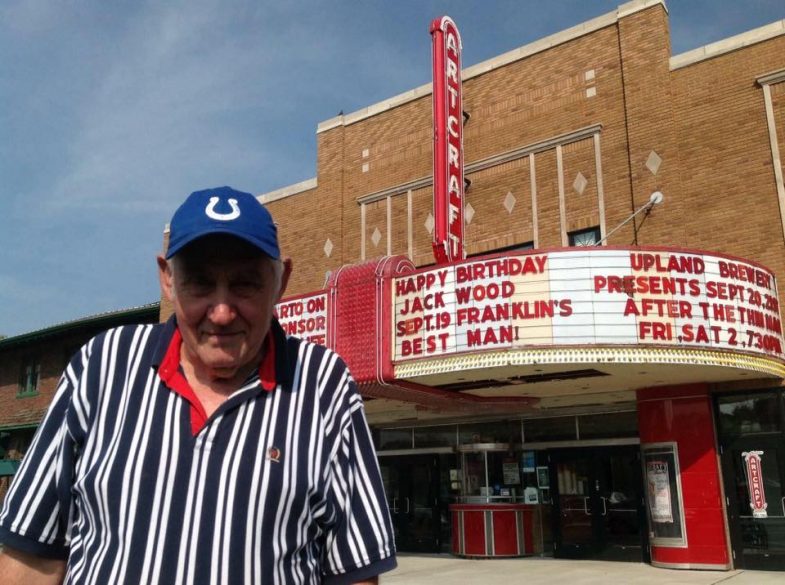 Even though it is hot here in the MidWest, fall is peaking its colorful head around the corner. I look forward to the fall because a mantle of peace and cooler temperatures descends on this small town of mine. This week something happened which caused this town to slow down and reflect deeply on itself and its true nature. A gentle soul who was a fixture in town passed away. Jack was born in 1935 and lived gloriously till 2021. Jack was different, but to be frank, if we all look closely enough and transcend our egos we are all different. Jack always smiled as he made his daily circuit through our town. Thirty years ago he appeared and in his own way started shaping the perspective of our town. In many ways he was a miracle and an angel. His real ability was to make us all transcend ourselves and push our battered senses to a place of peace.

One of the wonderful things about a community run theater is that it becomes a haven. A haven for community, of inclusion, and of acceptance. When the latest iteration of the Historic Artcraft Theatre came into being, Jack soon joined that community. He appeared on stage for pre show skits ( The Short Attention Span Theater), rolled the prize wheel, and became an evangelist for what a community theater could and should be. Jack distributed flyers and insisted that local merchants hang posters. Jack, with his deep memory and an encyclopedic knowledge of everything wrestling became an icon of what is good and he graced that goodness into the Historic Artcraft Theatre. While there is no doubt that Rob Shilts was the de facto head of the resurgence of the Historic Artcraft Theatre, Jack quickly became its heart. Any strong family will tell you that you need both a head and a heart in order to work properly.

Jack wove a web of community and of oneness. He spoke incessantly of “going to the Artcraft show” or going to “the show”. When he appeared on stage the audience erupted in applause and exuberance in a celebration of transcendence. When certain movies were played Jack would graciously wear a costume celebrating that movie. Most famously he appeared as “The Apple Tree” from “The Wizard of Oz”. I, myself, have been beaned once or twice by Jack’s targeted apples. He appeared in promotional videos that I produced for the Artcraft, and when he came on screen again the audience exploded. He appeared as one of the stars of “Pirates Of The Caribbean”, a frozen baseball player, a questionable blonde bombshell, a star of Italian Spaghetti Westerns and so many others. He always embraced the humor and he knew instinctively what the intent of the video was. When Jack came to my house he always made a beeline for the Lazy Boy and engaged people from a comfortable position.

This week this symbol of a true community theater passed away. On Sunday a celebration of life was held at the Historic Artcraft Theatre, a place where his heart will continue shining. As a boy he watched Westersn from the seats of that estemmed cricuible of dreams and when it came time to bid Jack safe travels, it was the place this town chose to celebrate his life. In many ways Jack showed us when we stopped thinking about ourselves and started to think about something other than ourselves how good life truly could be. He made me transcend myself and that made me better.

A community theater if operated in a manner that serves its audience is the heart of any community. It becomes vital to a community’s sense of self and can facilitate a re-imagining of the core of a town. It can introduce both vitality and invention to many small towns who have been devastated by the erosion of their core by big box stores. I can walk down the street in my town and ask a simple question, what is this community’s heart? The answer will always come back. The Artctraft. With that knowledge and that focus a town will prosper and will see in itself value and distinctiveness. People invest in things that so evidently produce dividends. A good community theater does that. I am so blessed that it contains a legacy like the Rembusch family, the family behind the “Silver screen” and the launching of feature length motion pictures and the greatest community theater on the planet, The Artcraft there is none better.

When my father passed away two years ago, the greatest empathy I experienced and the greatest expression of solidarity came from Rob Shilts and the Artcraft team. It is a kindness that lingers to that day and part of a gospel of community from which The Artcraft speaks.

The idea of community is drilled home in a definite and precise way in the way people are at a deep loss with the departure of that Saint of Community Movie Theaters, Jack. He showed us what was good about community, and he provided a deep example of the goodness that could rise within our souls when we let it. His spirit will linger, as he wanders through our hearts and our memories. Every time a snowflake falls in front of the glowing marquee, every time the fabulous prize wheel turns and every time applause or laughter erupts within the Artcraft, the soft whisper of his name, Jack, shall be woven into the sounds coming from the audience.

I know there are other angels out there drilling home the importance of the word, community. Jack knew it deeply and taught us all to look towards each other because in the end that is all we have.

He told us what was good, what was true and in the end how important it was to go to “The Artcraft show”. By listening to Jack, we gained a community and the movies spoke to us again with a stronger, more relevant voice.