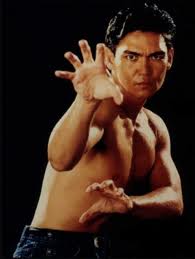 It’s a momentous day for longtime action fans today as the likes of Sylvester Stallone, Arnold Schwarzenegger, Bruce Willis, Chuck Norris, Jean-Claude Van Damme and Dolph Lundgren join forces on screen in The Expendables 2 [read our review here]. However, there’s another potential team-up on the horizon that’s sure to appeal to hardcore action aficionados, as B-movie legends Don ‘The Dragon’ Wilson (Bloodfist), Cynthia Rothrock (China O’Brien), Jeff Speakman (The Perfect Weapon) and Michael Dudikoff (American Ninja) are called up to the roster of The B-Team for an epic straight-to-video action ensemble.

“These are the names the producer right now has said he wanted: Michael Dudikoff, Jeff Speakman, Cynthia Rothrock and myself,” says ‘The Dragon’ in an interview with CraveOnline earlier this week. “But since there’s a lot of bad guys and a lot of good guys in it, there’s room for anybody that’s going to be available… There’s going to be plenty of action and the game plan is to get as many guys as we can get in. I literally know every one of them… Mark Dacascos [Drive], Richard Norton [Mr. Nice Guy]. I would get even obscure ones. I don’t know if you know Karen Sheperd [Cyborg 2] or Billy Blanks [Back in Action], I’d get any of these guys and even if they don’t do action, they would play just an officer coming into a room or do one line or whatever, just to stick with our strange goofy thing of putting all these guys in one movie. You’d see every one. If you watched these B-movies back in the [‘80s and ‘90s], I’d put Jerry Trimble [The Master] in there, Loren Avedon [The King of the Kickboxers]… if you could send me a list of the guys you want in, I’ll try to get every single one of them in.”

“It’s got a little comedic element,” explains Wilson as to what kind of tone we can expect from The B-Team, which is currently gearing up to go into production in Papau, New Guinea later this year. “We didn’t want to go hardcore and take ourselves too seriously because it’s kind of goofy to have all these B-movie guys all in the movie. So the producer wanted to add a little comic touch to it, so it’ll probably be a little funnier than my other movies. It’s a comedy. Well, not a comedy. It’s an action movie with comedy. There’ll be at least one comedian hired for the film but that one’s pretty close to getting done.”

If they can get Rowdy Roddy Piper in there, I’ll be a happy man. Who would you like to see lining up for The B-Team?